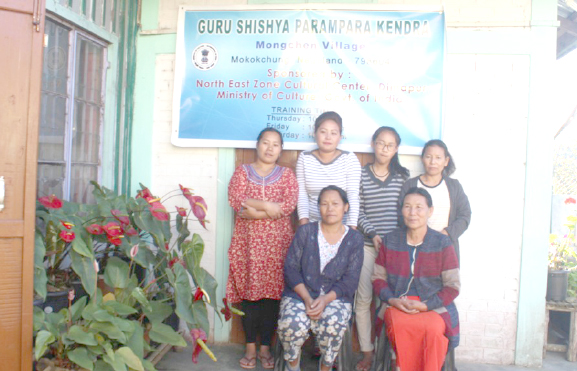 Dimapur, January 8: A Guru Shishya Parampara Kendra (a traditional centre) funded under the Ministry of Culture, Government of India was opened at Mongchen village under Mokokchung district on January 7.
The centre (or Kendra) has been opened under the central flagship programme called Guru Shishiya Parampara Scheme and facilitated by the North East Zone Cultural Centre (NEZCC), Dimapur.
The centre will be looked after by a ‘Guru’, Punalemla, who is a certified handloom artisan. The ‘guru’ will be assisted by an ‘accompanist’ and the centre will admit four shishyas (or pupils) who will learn the art of traditional weaving and other handloom works.
The main objective of the Kendra under the scheme is to promote, preserve and exhibit the rich traditional arts like weaving, dance, folksongs, dresses etc. in the society.
The Kendra is a first of its kind being established in Mokokchung district under this central scheme. Through this programme, the Kendra at Mongchen is expected to promote the women and girl child by promoting the art of weaving and at the same time enable them to become self-sufficient and self-reliant by practicing the traditional art of weaving and also by partaking in different expos all over the country.
The shisyas (or pupils) will be given extensive training throughout the year at the centre. The pupils will be given training every Thursdays, Fridays and Saturdays from 10 am – 1 pm.
(Page News Service)