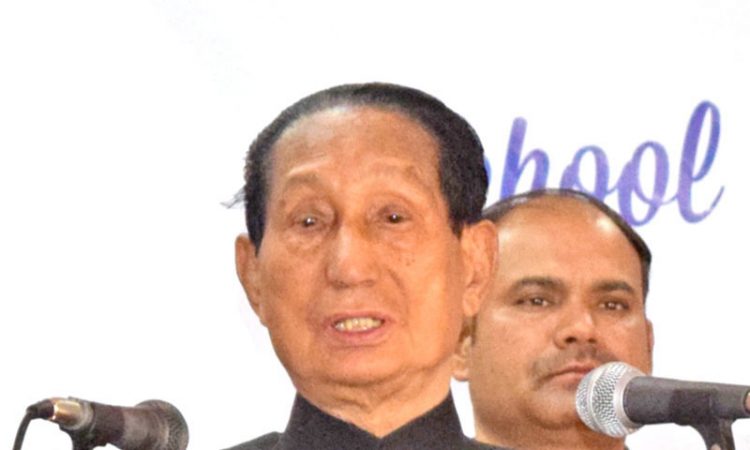 Dimapur, October 18: Former Chief Minister of Nagaland SC Jamir on Friday insisted that when the state of Nagaland was founded, it was founded with a dream to be a part and parcel of India and be a developed and progressive state where people would live in peace and harmony.
Speaking at the annual day programme of St. Mary’s Higher Secondary School here as a special guest, the former Governor of Odisha said that along with China and Japan, India will play vital roles in shaping the destiny of Asia and the world and it should be a fortunate thing to be a part of this country.
Being critical of the present scenario of the state, he said that Nagaland is facing demonic elements with gun-culture suppressing and oppressing the state, creating fear psychosis, so much that people are afraid of speaking the truth and their souls are in chains.
Comparing the state with a seriously wounded person, he said that people should not wait for a savior from outside to come and save them but the process of cleaning the society has to ‘start from us’ and claimed education can make people understand what is good from them and what is not.
“Nagaland of 1950s is not longer the Nagaland of 2019,” he said.
He said it is entirely up to Nagas to decide the fate of the state – whether people want to live in peace and harmony or in chaotic conditions and continued that Naga people are passionate about a new dawn of political settlement, and hopefully that would bring peace in the land.
On the occasion, he also claimed that Dimapur, the mini India where all communities and tribes live, is no longer the place it used to be. He blamed many negative factors plus inability of the authority to control them has resulted in disruption of the idyllic environment of Dimapur.
To the students, he said that they are fortunate to be the driving force of the country and the 21st century belongs to them.
Previously, in the inaugural speech, principal of the school Neena Dutta had mentioned that the school has become one of the best institutions in the state after its establishment in the year 1992.
On the occasion, Vasu Singh (Class 10) was awarded the P. Shilu Ao Award (Student of the Year), Sekhoto Neinu (Class 10) was awarded Dr. Talimeren Ao Award (Sports), Avantika Roy (Class 10) was awarded APJ Abdul Kalam Award (Academic), Inakali Achumi was awarded the Mother Teresa Award, and Sanskriti Anand was awarded Best Dancer Award. (Page News Service)