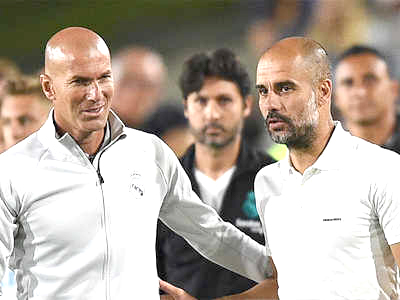 MADRID, December 21: Real Madrid’s Zinedine Zidane still believes Pep Guardiola is the best in the business despite the Manchester City boss being questioned in England for the first time with his side trailing Premier League leaders Liverpool by 14 points.
Zidane will come up against Guardiola for the first time as a manager when their sides meet in a blockbuster tie in the Champions League last 16 next February. “It will be special to face him, I respected him a lot as a player and I do as a coach, I think he is the best coach in the world,” Zidane told a news conference ahead of his side’s La Liga game at home to Athletic Bilbao on Sunday.
“He has proved himself throughout his career and of course I’m looking forward to facing his team.”
The two midfielders only faced each other three times on the pitch, with Zidane joining Real as a player in 2001 just as Guardiola had called time on his rich career with Barcelona.
Both men have had huge success as coaches, with Guardiola winning eight league titles with Barcelona, Bayern Munich and City as well as two Champions Leagues with Barca, while Zidane has lifted Europe’s biggest prize three times as Real coach.
Real are second in La Liga, locked on 36 points with leaders Barcelona after Wednesday’s 0-0 draw in the ‘Clasico’.
Zidane will still be without injured pair Eden Hazard and Marcelo for the game against seventh-placed Athletic and will also be missing midfield anchor Casemiro through suspension. (Agencies)