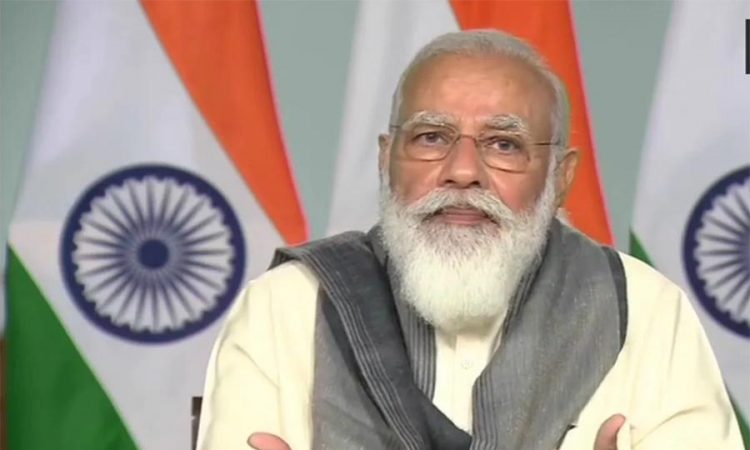 NEW DELHI, NOVEMBER 24: Noting that alertness has given way to “widespread” negligence about COVID-19 among people, Prime Minister Narendra Modi on Tuesday said a few States have seen a surge in infection in the same way as many countries witnessed after an earlier decline and asked Chief Ministers to focus on bringing down positivity and fatality rates by curbing the virus transmission.

India has come out of the “deep sea” of this crisis after the world had thought that it will find it difficult to deal with the pandemic and the country is now moving towards the shores, he said, while using a famous verse to call for avoiding a situation where “our ship capsizes where the water is shallow” (hamari kashti wahan doobi, jahaan paani kam tha).
In a meeting with Chief Ministers and other representatives of States and Union Territories, Modi made an impassioned appeal for ensuring that no wrong step is taken in fighting the disease and also asked States to put in place adequate infrastructure like cold storage facilities for future vaccine distribution plans, saying it is a national commitment that everyone gets inoculated.
Just like the focus on the COVID-19 fight has been on saving each and every life, the priority in the vaccination drive will be to ensure that it reaches everyone, he asserted.
Though he avoided giving a timeline about the vaccine, saying the Government is keeping a close watch as some vaccine candidates have reached the final stage of the trial, the Prime Minister asserted that the safety of citizens will be as much a priority for the Government as the speed of the vaccination programme.
While experts and scientists work on developing the vaccine, the Central and State Governments have to focus on containing the virus spread, he said, cautioning against any laxity and negligence which, he added, have been seen in the “fourth stage” of the fight against the pandemic.
India has so far limited the harm due to the pandemic at the minimum and is in a much better state than many other countries in terms of recovery and fatality rates, he said.
In the meeting, which had a special emphasis on 8 States that have seen an upward trend in the corona cases, Modi asked all Chief Ministers to work to bring down the positivity rate to near 5% and the fatality rate to below 1%. He called for a higher share of RT-PCR tests.
These 8 States with high caseloads are Haryana, Delhi, Chhattisgarh, Kerala, Maharashtra, Rajasthan, Gujarat and West Bengal.
The cumulative national COVID-19 positivity rate stands at 6.87% as on date, while the daily positivity rate is 3.45%, as per Health Ministry data. Some States, however, have higher positive rates than the national average. The national fatality rate currently stands at around 1.46%, but it is higher in Delhi and a few other states.
Modi said the first phase of the disease was marked by fear with reports of a few people even taking their own lives in panic, while the second phase saw a sense of apprehension creeping in as people avoided others and hid their infection in fear of being socially ostracized.
In the third phase, Modi noted, there was a sense of acceptance about the disease with those infected even announcing it publicly and asking others to take care while people generally become more alert.
As the recovery rate grew, people began thinking that the virus is not harmful and has weakened, he said of the fourth phase. Many thought even if they are infected, they will be cured, he added.
This negligence became widespread, the Prime Minister said, adding that the mistakes turned into danger as laxity emerged.
“We will have to spread awareness about the dangers of corona in the fourth phase. Those who have to work on vaccine are working on it but we have to focus on the corona”, he said.
Governments and administration have to be more vigilant in curbing the transmission, he said.
Several states have resorted to curbs like night curfew with a rise in COVID cases and have also enforced punitive measures against those not wearing masks.
Modi asked Chief Ministers to share their suggestions in dealing with the virus and also about vaccine programme with him in writing, saying no one can impose anything and they have to work together.
He also said the effort has been to make medical colleges and district hospitals self-sufficient in oxygen generation and added that a special emphasis of the PM CARES Fund has been on making oxygen available. The process for establishing more than 160 new oxygen plants is underway, he noted.
A Government statement later said Chief Ministers praised the Prime Minister’s leadership and thanked the Centre for providing necessary assistance in improving health infrastructure in states.
During the meeting, Union Health Secretary Rajesh Bhushan gave a presentation on the current COVID-19 situation and shared details about preparedness. He discussed targeted testing, tracing and testing all contacts within 72 hours, increasing RTPCR testing, efforts to improve the health infrastructure and fine-tuning of data reported from the States.
NITI Aayog Member Dr VK Paul gave a presentation on delivery, distribution and administration of the vaccine. The high-level meetings for review of the status and preparedness of COVID-19 response and management, as also to discuss modalities of the vaccine delivery, distribution and administration were also attended by Union Home Minister Amit Shah and Health Minister Harsh Vardhan.
At the meeting, Delhi Chief Minister Arvind Kejriwal is believed to have said the high severity of the third wave of COVID-19 cases in the national capital is due to many factors with pollution being a significant one. He also told the Prime Minister that Delhi saw the peak of 8,600 Coronavirus infections on November 10 during the third wave and since then, the number of cases as well as the positivity rate is steadily decreasing, sources said.
Delhi recorded 4,454 fresh COVID-19 cases and a positivity rate of 11.94% on Monday, while 121 more fatalities pushed the death toll due to the disease to 8,512 in the city. This was the sixth time in 12 days that the daily number of deaths crossed the 100-mark in the national capital.

West Bengal Chief Minister Mamata Banerjee assured Prime Minister Modi that her Government is fully prepared to work with the Centre and all other stakeholders for the speedy implementation of the COVID-19 vaccination programme in the state.
Maharashtra Chief Minister Uddhav Thackeray, on the other hand, said “some parties” put the lives of people at risk by agitating on roads ahead of the second wave of COVID-19 and said they should be asked to not play politics at this crucial juncture. He said the Prime Minister or Union Home Minister Amit Shah should convene a meeting of all parties to tell them about the seriousness of the situation.
Thackeray did not name any party but his remarks came in the backdrop of the Maharashtra BJP staging street protests for reopening of temples in the state and on the issue of inflated electricity bills in the recent past.
(PTI)