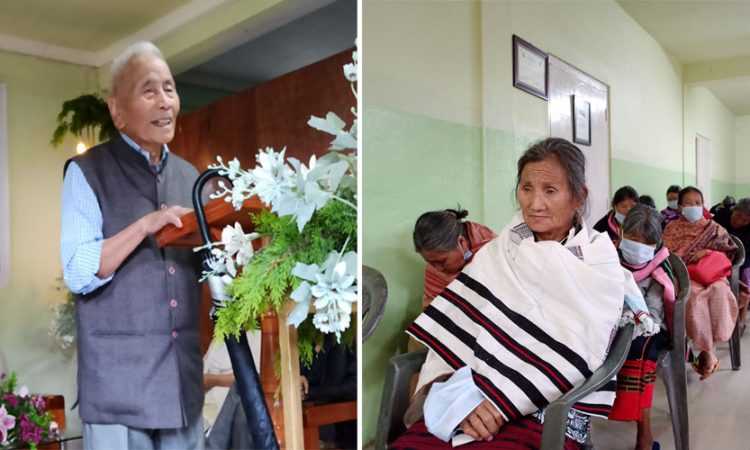 Kohima, August 1: “The state government should take a more proactive approach in ensuring universal coverage to all the senior citizens eligible for pension,” urged the 102-year old, Rev. K. Tsaikha Shohe at the 16th Foundation day of the Good Samaritan Senior Citizen’s Home, Meriema on August 1.
The visiting Centenarian said that Nagaland has about 1300-1400 villages, and there are a lot of senior citizens in the villages who are going through hardships because they are not in a position to avail even the pension to which they are rightfully entitled.

“Therefore, the state government should take a more proactive approach in ensuring universal coverage to all the senior citizens eligible for pension,” he said
In an event that was held last month, Assistant Director of Social Welfare, K Wango Langsym said, “There are 57,400 beneficiaries in Nagaland under Indira Gandhi National Old Age Pension (IGNOAPS) and also pointed out that a large number of eligible beneficiaries in the state were still not covered owing to the ceiling set by the Union Ministry of Rural Development.”
Also speaking at the event, Commissioner Secretary, Social Welfare, Sarah R. Ritse said, “Covid-19 pandemic has severely impacted all of us, not sparing even our senior citizens. In such times, the recently launched senior citizen helpline to provide guidance, information, emotional support and direct field intervention is a much-needed initiative. The Department of Social Welfare will try our best to make our services accessible to help older people in distress.”

Representative from Nagaland Senior Citizen Helpline, Bendangmeren also explained the workings of helpline where it seeks to make a positive difference in lives of senior citizens by creating a national helpline which will act as a platform for addressing the grievances by providing necessary information and intervention through collective and highly committed partners.
“Our objective is to provide information in terms of pensions, government schemes, there are many benefits and schemes ensured by the Government but due to lack of knowledge and ignorance, it is not being utilized to the fullest extent. The helpline is also in a position to give legal assistance, rescue of senior citizens,” he added.
The pioneer and the founder of the Good Samaritan Senior Citizen’s Home (GSSCH), Neithonuo Liegise informed that the GSSCH which is currently in Meriema, near Nagaland High Court, was founded on August 2005 under the aegis of Good Samaritan Women Society. Before moving to its present location, the home was first at D-Block Kohima and later moved to Highschool Area, Kohima.
Summarizing her 16-year journey with the GSSCH, Leigise extolled the unmeasurable love of God that she has witnessed throughout the years, “I am utterly amazed at the gracious hands of God working miracles in life,” she added.
Talking about the genesis of the GSSCH, Leigise said that her two daughters were still in their pre-school and she was expecting a third child when she pioneered the home for senior citizens

While the GSSCH has a sprawling one-acre campus in Meriema at present, Leigise recounted that the initial years were challenging as they had to start from scratch. “With no building, lack of funds or any mode of transportation, there were times when we even struggled to pay house rents,” she said.
She said things took a turn for the better as the Old Age Home was allotted 1 acre of land by the State Government in 2010, in the same year SBI donated a van and the construction of the facility was completed on September 6, 2012 with donations from well-wishers, loans and credit before getting grant-in-aid from the government.
Leigise also shared that GSSCH has started receiving grant-in-aid from the state government since 2015 and they have managed to pay off all its pending debt by 2020.
From the day of its founding to present day, GSSCH has admitted 86 senior citizens, out of which 53 have died and there are currently 25 Senior Citizens admitted to the facility, she added.
Apart from setting up an Old Age Home in Kohima, Leigise also shared that another home for senior citizens under the aegis of the GSWS was established at Ngwalwa, Peren, on October 1, 2020. (Page News Service)