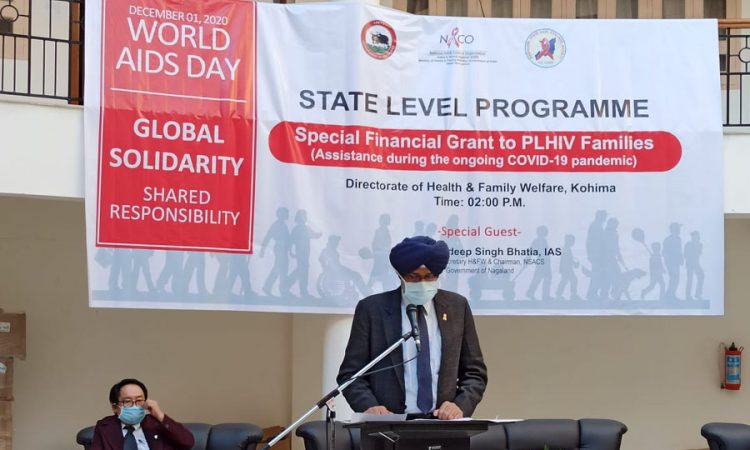 Our Correspondent
KOHIMA, DECEMBER 1: The prevalence rate of HIV/AIDS in Nagaland is the 2nd largest in India and 7 times greater than the national average, said Principal Secretary, H&FW & Chariman, NSACS, Amardeep Singh Bhatia, while addressing a gathering on the occasion of World AIDS Day at the Directorate of Health & Family Welfare, Kohima, on December 1.

Bhatia recounted that while Nagaland had just 1 Integrated Counselling and Testing Centre (ICTC) facility in 2006, the state has now over 300 facilities dedicated to testing and treatment of AIDS in the State. He said the National AIDS Control Programme (NACP) at the state level was able to influence and help set up good blood bank facilities and also influence protocols to be followed in order to ensure that there is no blood transmission.
“Also, we were able to reach out to a large percentage of people who are in the high-risk group and we were able to pass strong anti-stigma law through the partnership at the national and state level,” Bhatia said, adding, “However, despite all these interventions that we’ve had, the prevalence rate of HIV/AIDS in Nagaland is the 2nd highest in the country and 7 times the National average which now stands at .22%”.
Sensing the need to do things differently and scale up the work which is currently underway, Bhatia suggested, “One thing that comes to my mind is to increase the testing in collaboration with the National Health Mission”.
“We have to ensure that there is 100% coverage of pregnant women in the state,” he added.
He continued, “I don’t know whether that is a realistic target or not but we should aim for that so that we will be able to identify all the infected women and ensure that the risk of transmission from mother to child is at least prevented.”
Bhatia stated that the National AIDS Control Programme both in the national and the state levels are known for very good evidence-based plan. He further maintained that NACP plans in collaboration with all the stakeholders, the NGOs, community based organizations and taking everyone along and it is also known for not only setting realistic targets but also ensures that those targets are being fulfilled.
On this day, we should rededicate ourselves to setting new targets and ensuring that we achieve these targets, he added.
Also speaking at the event, President, Kohima Network of Positve People (KNP+), Yuni called for setting up of Community Based Drug Dispensary Centre with a staff on standby in every block. She said that people with HIV/AIDS could not avail medicines during the lockdown with the onset of the COVID-19 pandemic and had to suffer a lot.
She also called for the revamping of Legislators Forum on AIDS which has been disbanded on October 22. Maintaining that people living with HIV/AIDS got lots of support from LFA while it was still in operation, she called for the reinstallation of LFA since people living with HIV/AIDS needed all the support.
While discrimination towards people living with HIV/AIDS is not seen in the open these days in our society, it still exists in our society in a very subtle manner, she added.
AD, GIPA (Greater Involvement of People living with AIDS), NSACS, Moasangla Jamir called on the state Government to put humanity above politics.
An NSACS official also informed that basing on this year’s World AIDS Day theme “Global responsibility”, a one-time special financial grant for educational support for one academic year to identified children infected and affected by HIV was carried out at in all the districts.
Almost all these children are either orphans or living with a single parent/grandparents/guardians. The selection has been made by a selection committee in all the districts headed by the Chief Medical Officers with district level positive networks, DAPCU office, Development partners, NGO partners as members. Initially, we planned for 33 CLHIV(Children Living with HIV/AIDS) to be awarded, but Peren District committee has decided to award 12 children out of which 10 are orphans and 2 with single parent).

The educational grant is Rs.12,000 per child (In Peren it will be Rs.3000 per child). So a total of 42 children will be supported through this special grant, the official said.
The NSACS official also said that a one-time special financial grant to deserving PLHIV families, especially women living with HIV, whose livelihood has been affected during the COVID-19 pandemic. The special grant is of Rs.10,000 each to 33 PLHIV families, 3 families per district, again identified and selected by the District Committees under the CMO. They are either daily wage earners or widowed/divorced/farmers or unemployed.