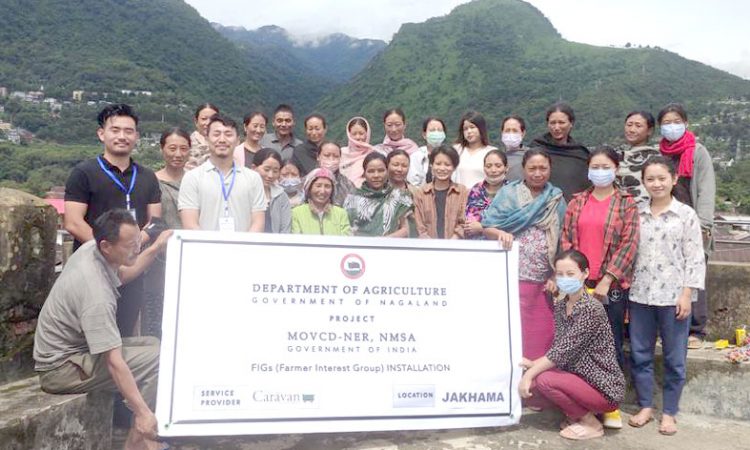 These FIGs will further federate into a Farmer Producer Organisation/Company, said chairman of ‘The Green Caravan’, Richard Belho.
Under the programme, there are around 10,300 farmers covering the entire State, while The Green Caravan will be covering 7 districts of Nagaland including Dimapur, Kohima, Mokokchung, Zunheboto, Mon, Longleng and Tuensang, he said, adding that the crops selected are high value crops like ginger, potato, green chilli etc., for commercial purpose.
Altogether, more than 100 villages will be covered in all 7 districts under the project, he said.
A total of 16 villages will be covered under MOVCD-NER phase-III in Kohima district, while the first village included in the FIG formation is Jakhama.
The FIG formation programme commenced after a prayer, and the lead farmer for Jakhama village Deizenuo Viswentso asserted that the farmers strictly practice organic farming. She also spoke on the problems faced during ginger cultivation.
She highlighted the requirements relating to equipment which would be necessary for easier crop management. She also informed that the first instalment of the Direct Benefit Transfer (DBT) has been received.
Project Associates of ‘The Green Caravan’, Manen Ozukum and Thejaseto Terhujah highlighted the aspects of MOVCD-NER programme.
A farm inspection session was conducted to assess the progress of the cultivation where the lead farmer informed that irregular rainfall was a problem but that they were trying their best to find alternate ways to ensure proper and timely irrigation.
The second village visited by the team under MOVCD-NER was Kigwema. Sharing the aspects of MOVCD-NER, Richard Belho spoke about the vision of a fully organic State.
The issues of some beneficiaries not receiving their DBT was shared by the lead farmer and the Project Associates assured to relay the message to the nodal Department.
The third village covered was Mezo Basa. During an interaction session, the problem of some farmers not receiving their DBT was shared and the Project Associates assured to relay the message to the nodal Department.

The fourth village covered was Jotsoma. Sharing the aspects of MOVCD-NER phase-III, Richard Belho informed the gathering about the ongoing works of The Green Caravan and assured help in all ways possible.
Mention may be made here that Prime Minister Narendra Modi had initiated a scheme for development of commercial organic farming in the North East region during 2015 which later became to be known as “Mission Organic Value Chain Development for North Eastern Region” (MOVCDNER).
(Page News Service)