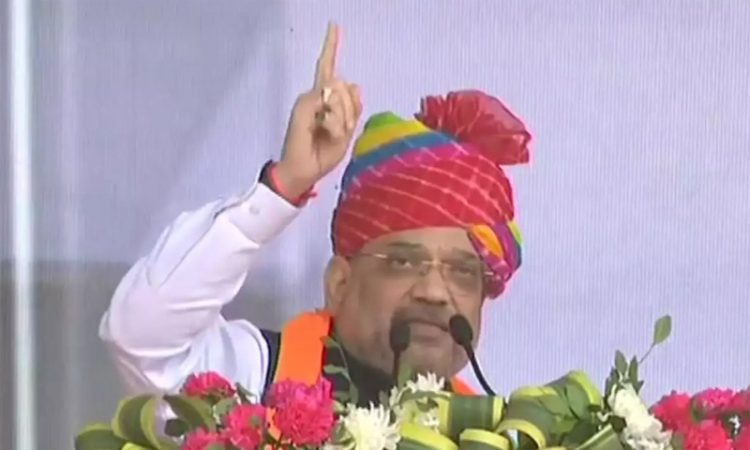 JODHPUR, January 3: Union Home Minister Amit Shah on Friday said the government will not budge an inch on its decision to implement the Citizenship Amendment Act despite the opposition’s “misinformation campaign”.
Launching an “awareness programme”, he said the Congress was misleading Muslims over the Act and challenged party leader Rahul Gandhi to a discussion “if he has read the law.”
The BJP will take out 500 rallies across the country, beginning Saturday to reach out to three crore people, he said.
Shah, who is also the BJP president, said the party had to launch this programme because of the misinformation spread by the opposition parties on the amended law.
“Let all these parties come together. The Bharatiya Janata Party is not going back an inch on the CAA ,’ he said at the meeting held in Rajasthan chief minister Ashok Gehlot’s assembly constituency.
The home minister said it is “shameful” that the Congress is criticising the sacrifice of great sons of the country, like Veer Savarkar, for the sake of its vote bank.
The remark comes amid a row over the distribution of a booklet against the Hindutva icon at a camp held by Congress affiliated Seva Dal in Madhya Pradesh. But Shah did not directly refer to it.
Opposition parties have criticised the amendment that allows non-Muslims an easier path to citizenship if they came to India from three neighbouring countries before 2015 after facing religious persecution.
“The law is not against the minorities,” Shah said.
“There is no provision in the Citizenship Amendment Act to take anyone’s citizenship away but it is a law to grant citizenship,” he added.
“We have not kept out any religion. We are giving citizenship to minorities of Pakistan, Bangladesh and Afghanistan whether they are Hindu, Sikh, Jain, Buddhist, Parsi or Christian,” he said.
He challenged Congress leader Rahul to a discussion on the law.
“Rahul baba if you have read the law come anywhere for a discussion (charcha). If you haven’t read it, I will get it translated into Italian,” he said, in a swipe at his Italian-origin mother Sonia Gandhi.
Shah said Congress leaders too had in the past talked about granting citizenship to those who faced religious persecution in neighbouring countries, but the party did not implement the suggestions due to the fear of losing its vote bank.
But Prime Minister Narendra Modi has protected the human rights human rights and honour of millions of refugees who came to India, the BJP leader said.
“Mahatma Gandhi had made the promise. Was he communal? Former prime minister Jawaharlal Nehru had also said in Parliament that citizenship will be granted to Hindus or Sikhs who have come. Were they communal?” he said.
“These refugee brothers were millionaires and today they have no place to live. There they had many bighas of land and here they have nothing to eat,” Shah said.
He said that percentage of the minorities in Pakistan and Bangladesh has declined while the minorities in India are living with honour.
The opposition is against granting citizenship to those refugees who have come to India after facing atrocities, and whose property and jobs were taken away, he said.
He referred to the pact between Jawaharlal Nehru and Pakistan’s Liaquat Ali Khan on the protection of minorities after Partition.
“Now, we will execute the Nehru-Liaquat agreement. This is the rule of Narendra Modi, no one has to fear. PM Modi government is going to give citizenship to all of you and make you feel proud of being an Indian,” he said in a remark apparently directed at the migrants.
“I want to say that the refugees who have come from those countries are from India only,” he added.
He said the Congress, Trinamool Congress, Samajwadi Party, Bahujan Samaj Party, Aam Aadmi Party and the Communists are opposing the law.
Shah said it is hard to understand why West Bengal chief minister Mamata Banerjee is opposing citizenship to Bengali speaking Hindus and Dalits living in West Bengal.
“There is no need to fear from Didi. I want to say that refugees living in Bengal will not have to face any atrocities. You will be granted citizenship with honour,” he said.
Shah also hit out at Ashok Gehlot, saying the BJP has implemented the promise mentioned in the election manifesto of his Congress government in Rajasthan.
He said the chief minister should stop protesting against the CAA and be concerned about the deaths of infants at Kota’s JK Lon Hospital, where 100 children died in December. (PTI)