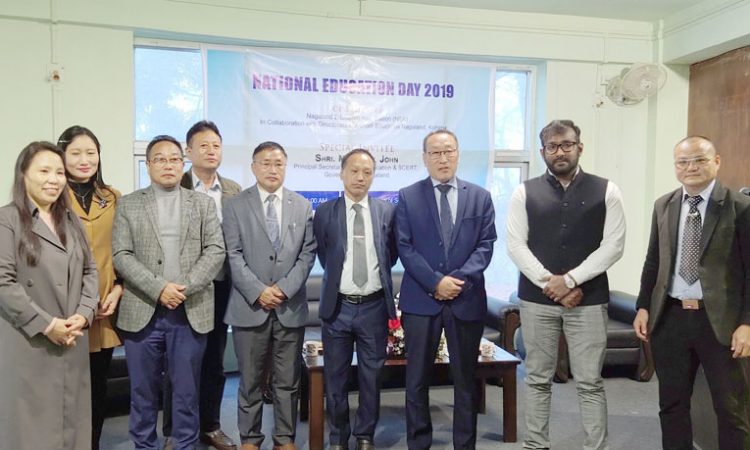 Principal Secretary Menukhol John along with officials of School Education and NEA during the National Education Day celebration in Kohima on November 11, 2019.

Kohima, November 11: Joining the country in observing National Education Day, education luminaries in Nagaland today stressed on the need for overall performance of government schools so as to bring about quality education in the State.
The main function was organized by Nagaland Education Association (NEA) in collaboration with Directorate of School Education in the latter’s conference hall here.
Principal Secretary of School Education and SCERT, Menukhol John said education can’t be touched by the government alone but it has to be the responsibility of all stakeholders, including the educational luminaries.
He also that the State’s policy Communitization of Elementary Education also needs some changes, for which the Department will be setting up a commission very soon to looking into the functioning of policy.
“We are at a critical junction of what we want to do with our school education, for which a wholesome change is the need of the hour,” he said.
The department is trying to bring changes and therefore the directorate team is being sent to the districts not for fault finding but to interact with the staff in the fields and understand the difficulties and the area requiring change.
Urging the teachers to teach students the manner in which they want teachers to teach their own children, John sought the commitment of teachers towards the profession and make something out of the students.
“We will have to continue to encourage each other,” he said.
It is doable if we put our heads together to build a strong foundation.
In a village in a district in our state, where the community has made it compulsory for the government teachers to make their children study in the same school. In another village, he said, a community and church have come forward in moulding the students.
He also affirmed the department is cross checking the data of government teachers and in the process of having clean and strong data base.
It is our dream to have no drop outs but everyone will be a useful citizen of the society.
Principal Director of School Education, Shanavas C said education is not only important for text book knowledge but it is much beyond for imparting moral values on the students and make them good citizens.
Pointing out that the teacher-student ratio of the state, which is currently at 1:8 is the highest in the country, he said Nagaland education department is the second largest employer after police department.
Nonetheless, Shanavas lamented most of the employees are there only for the sake of government jobs. He said many want government job but after getting appointment they don’t want to go to the rural places of posting.
Opining that most of the policies of the government for the department are teachers centric, he emphasized on the need to make a shift and focus towards students’ centric education programme to improve the education scenario of the State.
NEA president, Zavise Rume while appealing that the State government must come out with a strong and clear state policy on education. Towards this, he said that NEA has already launched a policy research on education system in Nagaland and collected comprehensive date on the system of education since the inception of the statehood.
Director of School Education, Wonthungo Tsopoe while stressing on everyone’s equal responsibility to make education a robust department, called upon all to join hands in eradicating proxy and absenteeism from government schools. He also supplemented the need for modifications and rectifications in communitization policy.
NEA general secretary Dr Bweyhunle Khing offered prayers for the programme while students of Kohima College Kohima presented special number and NEA publicity & information secretary, Dr Visiezolie Yashü gave the concluding remarks. (Page News Service)