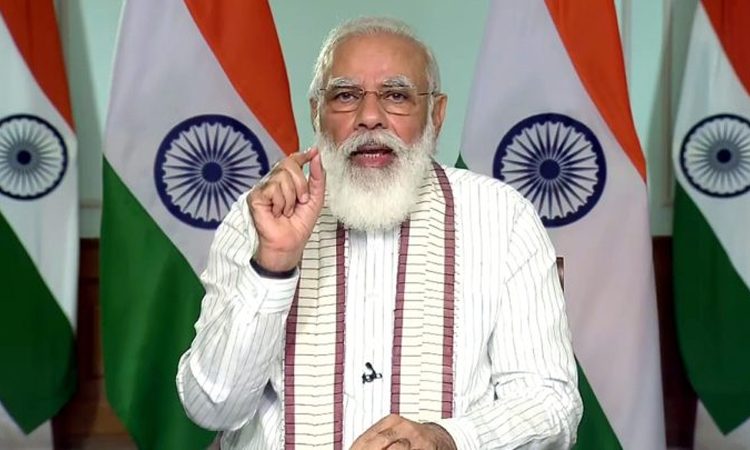 Ahmedabad, October 24: Prime Minister Narendra Modi on Saturday said his government is taking initiatives to strengthen the agriculture sector in the country so that farmers do not have to face any trouble.
His statement comes amid opposition to the new farm laws by farmers’ groups and political parties.
Modi was speaking after inaugurating three projects in Gujarat- one each related to agriculture, healthcare and tourism development- via video conference from New Delhi.
“In order to double the farmers’ income and to reduce the production cost and their troubles, we will have to increase our efforts with the changing times,” he said.
“Whether granting freedom to farmers to sell their produce anywhere in the country or creating thousands of farmer producer organisations, whether completing stalled irrigation projects or improving crop insurance scheme or 100 per cent neem-coating of urea or soil health card…the aim is to strengthen the agriculture sector so that farmers do not have trouble in farming. Initiatives like these are being taken continuously for it,” he said.
He launched the state government’s Kisan Suryoday Yojana (KSY) aimed at providing day-time electricity to the farmers in the state for irrigation and farming purposes.
The PM also inaugurated Paediatric Heart Hospital at the U N Mehta Institute of Cardiology and Research Centre in Ahmedabad, developed at a cost of Rs 470 crore by the state’s health and family welfare department.
Besides, he launched the recently-completed ropeway project on Mount Girnar, a major tourist and pilgrim site near Junagadh city in the state. The 2.3-km long ropeway is being touted as the longest temple ropeway in Asia.
Modi held the opposition responsible for the delay in completion of the Girnar ropeway project.
The project was proposed in 1983, and was delayed due to various reasons, most importantly due to the environmental concerns, before the UPA government granted it conditional approval in 2011.
“Had they not created hurdles in the Girnar ropeway project, it would not have got stalled for so many years.
People and tourists should have got its benefit a long back,” he said.
“As a nation, we all should think of the loss caused to the people and the country when such projects (Girnar ropeway) of public importance are stalled for a long time,” he said, adding that the new project will facilitate the pilgrims and tourists, and create job opportunities for the locals.
“More people will visit (a place) only when modern facilities are provided to tourists. Tourists want ease of living, ease of travelling,” he said.
Modi said the world’s tallest Statue of Unity attracted more than 45 lakh touristsbefore the pandemic.
“Look at the Statue of Unity dedicated to Sardar Saheb (Vallabhbhai Patel). The world’s tallest statue is becoming a huge tourist attraction. Before the coronavirus outbreak, over 45 lakh people had visited it. It is a big achievement in such a short time. It has been reopened (recently), and the number (of tourists) is increasing fast,” he said.
The Statue of Unity was inaugurated in October 2018.
Lauding the state government over the Kisan Suryoday Yojana (KSY), Modi said India has become a leading country in both solar production and consumption.
“Gujarat was the first state in the country that framed a detailed policy for solar energy a decade ago. In 2010, when a solar power plant was inaugurated in Patan, nobody had imagined that one day India will show the way to the world for ‘One Sun, One World, One Grid’,” he said.
“Today, India is a leading country in both solar production and its use. In the last six years, the country has become the fifth-ranking nation in the world in solar energy production,” the PM added.
He said the KSY will change the lives of lakhs of farmers in a few years by providing them electricity for irrigation from dawn to 9.30 pm.
He also talked about ‘Kusum Yojana’ that aims to help farmers, cooperatives and panchayats in setting up small solar plants on barren lands, and link solar pumps to the grid, he said.
Modi lauded the state’s initiative in taking water to households under the ‘Nal Se Jal’ scheme.
Urging the farmers to save water, he said, “As the KSY has been launched, all have to repeat the mantra- ‘Per drop, more crop’.”
“As farmers will get electricity during the day, they should also focus in saving more water,” he said, adding that day-time power supply will make things easier for farmers to set up micro-irrigation.
Changing lifestyle is increasing heart complications, Modi said, adding that the heart hospital will provide facilities to the people of Gujarat and others.
In his address, Chief Minister Rupani targeted the “anti-Gujarat people” for stalling the Girnar ropeway and the Sardar Sarovar project.
“We all know that in the past, anti-Gujarat people tried to create hurdles in many projectslike Narmada and Girnar ropeway so that Gujarat, Modi and BJP do not get the credit. But luckily for us, when Modi became the PM, both the projects were realised,” he said.
In the first phase of the KSY, which was recently announced by Rupani, farmers in Dahod, Junagadh and Gir- Somnath districts of the state will be covered, the government said in a statement.
On the occasion, Modi also inaugurated a mobile app for tele-cardiology at the Ahmedabad civil hospital. (PTI)