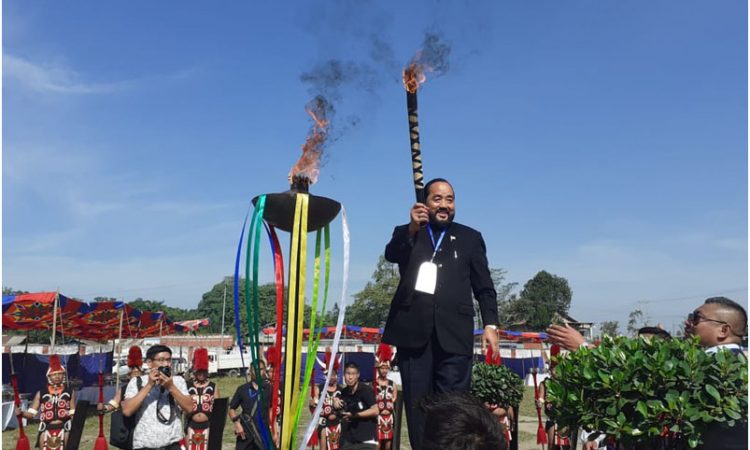 Dimapur, November 23: Deputy Chief Minister of Nagaland, Y Patton on Saturday said that the government servants posted in the ENPO areas should not see it as punishment and if anyone doesn’t comply, the person would be sternly dealt with even to the extent of termination from job.
He said this while speaking as the jubilee guest here at DDSC stadium on the occasion of the completion of 25 years of Eastern Nagaland People’s Union Dimapur.
Stating that many of the employees draw salaries from Dimapur and Kohima when their posting is in ENPO areas, he said if anyone is not joining their respective offices are found, he should be reported and he will take the necessary steps, and added that because of people like this, the area feels neglected.
Directing at the contactors, he said that he is not going to compromise on the workmanship of the contractors and alleged that the poor conditions of the road is often because the contractors take in Rs 1 lakh and spend only Rs 10,000 on the construction and in the end it is the government that has to bear the blame. He even asked the contractors to refrain from threatening government officers on duty.
On the occasion, he also appealed to the legislators of the four districts to adopt two villages each in their constituencies and develop them as model villages. He informed that he has already adopted one and he would be taking care of all the necessary amenities of the village. He also asked the well-to-do officers to adopt villages.
“People call Nagaland land of rumours and propagandas,” he said, and reiterated that the DAN government under the leadership of Chief Minister Neiphiu Rio is going to complete its tenure and the pre-poll gentlemen agreement between BJP and NDPP remains, and all the rumours going around about him going to Hebron to topple the government are lies.
He asked the attendants to celebrate the jubilee forgiving the differences they might have with each other and know that his door is always open for the people of the ENPO areas.
Minister of Health & Family Welfare and Chairman of Eastern Nagaland Legislatures’ Union, S Pangyu Phom who was the Guest of Honour on the occasion said that the union was formed with the objective of unity in diversity and it is now time to come closer and be more united.
He said that due to technology, the world has become a smaller place and the mentality of being referred as ‘backward’ and asking for quotas must go, and there is sweetness in achieving something on the basis of merit.
ENPO President Kekongchim Yimchunger, in his speech had mentioned that while everyone in the state talks about unity, the way to achieve it is not being selfish and greedy, and asked the people of ENPO areas to set an example and do away with greediness.
He blamed greed of the Nagas for mistakes committed that can be forgiven but not forgotten.
Calling 25 years a long time, he said that it has matured enough to take big decisions now.
12 legislators out of the 20 from the ENPO areas had attended the celebration which was filled with music and cultural performances put up by different tribes. (Page News Service)