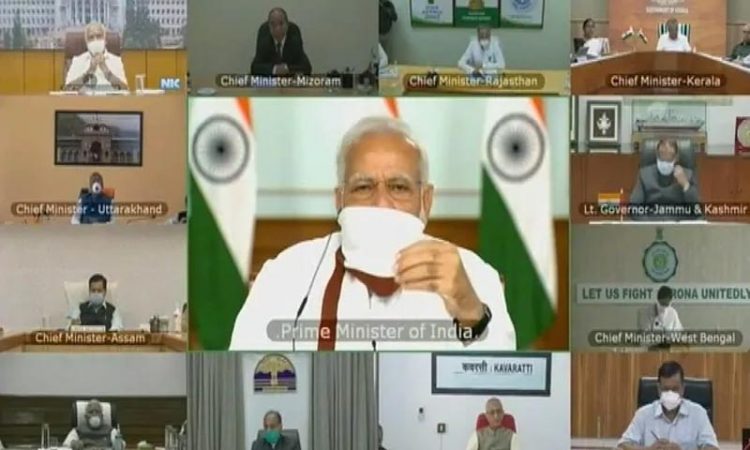 New Delhi, April 11: The Centre is considering a request made by most states to extend the ongoing nationwide lockdown by two more weeks beyond April 14, government said on Saturday after Prime Minister Narendra Modi interacted with chief ministers and told them focus should be now on health as well as prosperity of the nation.
“During the video-conferencing with state CMs today, most states requested Prime Minister Modi to extend the lockdown for two more weeks. The Central Government is considering this request,” a government spokesperson said.
There are indications that an extension in lockdown may come with certain relaxations to boost economic activities and sources said proposals being considered include lesser restrictions in areas unaffected by the virus spread.
After the interaction, Karnataka Chief Minister B S Yediyurappa said the next two weeks of lockdown, after April 14, would be different from the ongoing one for three weeks.
He said the prime minister told the chief ministers that the lockdown extension was inevitable and guidelines will be issued about its implementation for further 15 days in a couple of days.
During his interaction, Modi, himself wearing a white mask, told chief ministers the focus should be on “jaan bhi, jahaan bhi” and it is essential for “India’s bright future, and prosperous and healthy India”, the statement said.
“While announcing the lockdown, I had said ‘jaan hai to jahan hai’… Most people in the country understood it and discharged their responsibilities by remaining indoors. And now it is imperative to focus on both aspects, ‘Jaan bhi Jahan Bhi’, for India’s bright future, and prosperous and healthy India,” Modi said.
When every citizen does his work while keeping both these aspects in mind and follows the government instructions, then it will further strengthen our fight against coronavirus, he said.
Farmers and industry bodies have sought certain relaxations during the lockdown to carry out necessary activities.
During the video conference with Modi, several chief ministers including Punjab’s Amarinder Singh, West Bengal’s Mamata Banerjee and Delhi’s Arvind Kejriwal had suggested extending the lockdown at least by a fortnight.
Odisha and Punjab have already extended the lockdown till April 30 and May 1 respectively.
The ongoing 21-day nationwide lockdown to contain the COVID-19 crisis, announced by Modi on March 24, is scheduled to end on April 14.
Modi was accompanied by some senior officials, including from the Union health ministry, during the meeting and the chief ministers who participated in it also included Mamata Banerjee (West Bengal), Uddhav Thackeray (Maharashtra), Yogi Adityanath (Uttar Pradesh), Manohar Lal (Haryana), K Chandrashekhar Rao (Telangana) and Nitish kumar (Bihar). (PTI)