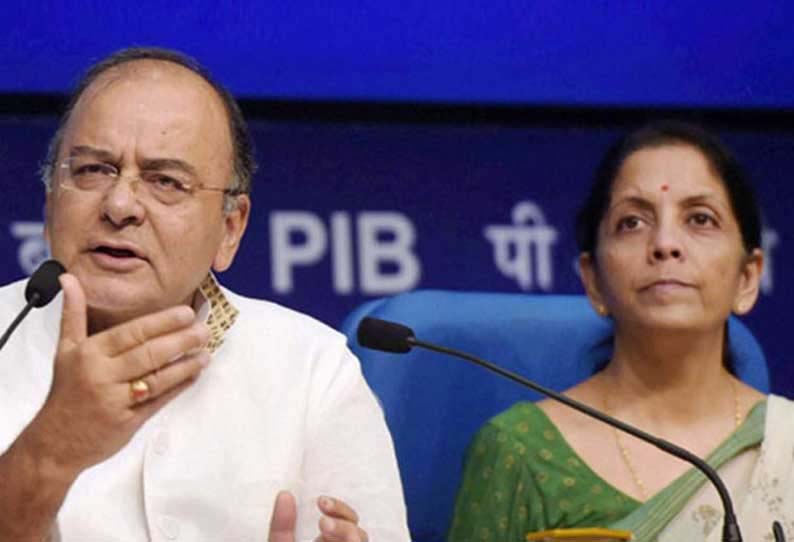 New Delhi, December 14: Bolstered by the Supreme Court verdict on the Rafale deal, the government on Friday ruled out the possibility of a Joint Parliamentary Committee probe into the contract and mounted a strident counter-attack on the Congress, saying the “deaf” will never hear an answer.
At a joint press conference with Defence Minister Nirmala Sitharaman, Finance Minister Arun Jaitley called the allegations relating to Rafale jet deal as “fiction writing” that compromised national security, while adding that falsehood is bound to fall apart and “disrupters” have lost on all counts.
His comments were seen as an apparent reference to Congress president Rahul Gandhi who has been accusing the government of corruption in the Rs 58,000-crore deal for procurement of 36 Rafale aircraft from France. The Congress has been demanding a probe by a Joint Parliamentary Committee (JPC) to the deal.
“Falsehood is bound to fall apart. Indeed it has. Falsehood always has short life. In this case it was a few months. And falsehood always lowers the credibility of its creator,” Jaitley said.
Asked about Congress reiterating its demand for a JPC probe even after the court order, Jaitley said, “The deaf will never receive an answer. They cannot hear it.”
He said defence deals like the Rafale cannot be probed by bodies like the JPC which split on the basis of political affiliations and that they can be scrutinised only in a court of law.
The Congress has been disrupting Parliament demanding a JPC into the deal.
In a relief to the Modi government, the Supreme Court on Friday dismissed the pleas challenging the Rafale deal, saying there was no occasion to “really doubt the decision making process” warranting setting aside of the contract.
The Congress has been carrying out a political campaign against the government, alleging massive corruption in the deal. The government has been rejecting the charges.
“After the SC verdict, it is absolutely conclusive. I don’t think there is any scope left for a doubt or discussion or for anything for a political body which splits on partisan basis to decide the justiciability of the process,” said Jaitley when asked about possibility of a JPC probe.
He said the “truth” is known through the judicial process in these kind of cases and not through a “partisan way”.
Asked whether he was doubting the relevance of JPC in a parliamentary democracy, Jaitley talked about a similar probe into the Bofors case and said the panel was split on partisan lines. “The subsequent history proved every word of that JPC to be false,” he said.
Accusing Rahul Gandhi of misleading the country on the Rafale deal, the Finance Minister said there has been a precedent in democratic countries world-over that if a politician is caught lying, then he or she resigns.
If the person concerned are in positions of power, then impeachment is initiated against them, he said, adding, “Those who created the untruth, should at least place the truth in the House.”
The Finance Minister said the price details of the Rafale deal have been given to court in sealed cover and cannot be made public.
The Finance Minister also said, “If honest deals in the interest of national security and commercial interest are brought under a clout, then civil servants and armed forces officers in future will think 10 times before going ahead with such exercise.”
He said those who created the “falsehood” have hurt’s India’s larger national security interests.
On Congress’ charge of crony capitalism in selection of offset partner for the deal, Jaitley said, “People incapable of understanding serious issues tend to rely more on slogans than on substance. Merely a false statement of a political leader cannot taint the offset mechanism.”
Congress chief Rahul Gandhi has been accusing the government of putting pressure on Dassault Aviation, the makers of Rafale, in selection of Reliance Defence as offset partner for the deal. Dassault Aviation, Reliance Defence and the government had trashed the charges.
Jaitley said the aircraft being procured by the NDA were 9% cheaper than the negotiations conducted with Dassault by the previous UPA, while the weaponised jets were 20% cheaper. He said the overall price considering various parameters including escalation clauses will be 40% cheaper. (PTI)