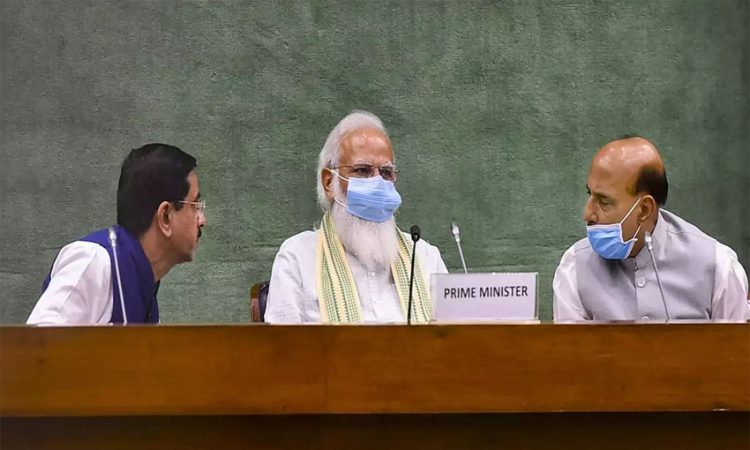 An official statement later said the Prime Minister told the floor leaders that according to the country’s traditions of healthy democracy, issues concerning the people should be raised in an amicable manner and the government should be given an opportunity to respond to these discussions.
Modi said it is everyone’s responsibility to create such a conducive environment and added that people’s representatives truly know the ground-level situation, hence their participation in these discussions enriches the decision-making process.
Modi, according to the statement, called for healthy discussions in Parliament and sought the cooperation of leaders of all political parties. He expressed hope that the sessions run smoothly and complete the business. He also expressed his condolences on the loss of lives due to COVID-19 pandemic.
The Prime Minister said as most of the parliamentarians have been vaccinated, it will help undertake legislative activities in Parliament in more confident environs.

“Took part in the all-party meeting before the start of Parliament’s Monsoon Session. We look forward to a productive session where all issues can be debated as well as discussed in a constructive manner,” Modi later tweeted.
At the meet, opposition parties objected to the government’s offer of a joint address by the Pime Minister on the Covid situation to MPs of both the Houses on Tuesday in the Parliament House Annexe, alleging it was another way of bypassing parliamentary norms.
At the meeting, Parliamentary Affairs Minister Prahlad Joshi announced that Modi will address MPs of both the Houses on July 20 and speak on the pandemic.
“…Parliament is in session. Come to the floor of the House,” said TMC Rajya Sabha MP Derek O’Brien who attended the meeting.
Sources in other opposition parties confirmed that the leaders refused Joshi’s offer and some even suggested a joint sitting of the two Houses in Central Hall.

At the meeting attended by 33 parties, the Prime Minister said suggestions from public representatives, especially from the opposition, are valuable as they make the discussion rich.
Besides Modi, Defence Minister Rajnath Singh, Union minister and Leader of House in Rajya Sabha Piyush Goyal and Parliamentary Affairs Minister Joshi were present on the occasion.
Floor leaders of all prominent opposition parties, including O’ Brien from the TMC, Tiruchi Siva from the DMK, Samajwadi Party leader Ram Gopal Yadav and BSP’s Satish Mishra were also present. Apna Dal leader and NDA ally Anupriya Patel and LJP leader Pashupati Paras also attended the meeting.
The Monsoon Session of Parliament will start from Monday and is scheduled to conclude on August 13. A total of 19 sittings are planned.

On day one of the session, Modi will introduce the newly inducted ministers in both the Houses.
It is the convention that after the formation of a new government or an expansion or reshuffle in the Union Council of Ministers, the Prime Minister introduces new ministers in both the Houses.
There was a major rejig in the Union Council of Ministers recently. While several new faces were inducted, some ministers were elevated to the Cabinet rank and portfolios of some others were changed.
Some new members who recently entered Lok Sabha following bypolls would also take oath as members of the lower house on Monday. (PTI)