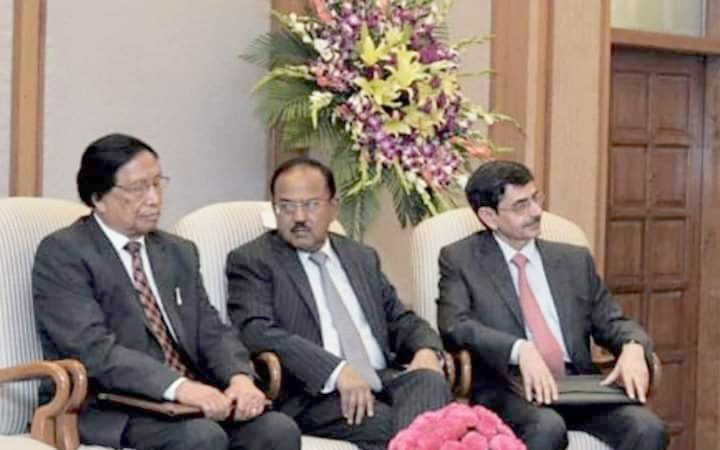 Kohima, November 9: The Union Government and the National Socialist Council of Nagalim (NSCN) today reviewed the competencies which needs to be resolved before the final agreement is signed.
Government’s representative and Governor of Nagaland R N Ravi reviewed the competencies with the NSCN leader led by General Secretary, Thiungaleng Muivah. Sources said the Centre is in hurry to ink the final agreement with the Naga rebel groups before Christmas, but there are competencies which are to be reviewed thoroughly to avoid complications in the future.
National Security Advisor, Ajit Doval is behind the scene helping Centre’s interlocutor, R N Ravi, to conclude the Naga peace process with NSCN and NNPGs. Naga groups have been talking about honourable and acceptable solution but so far they have not placed the competencies before the people. But it is understood that sovereignty and integration has been compromised with the Government by the Naga groups. The final pact is accepted to be signed within the Constitution of India with a Naga flag, not be used for government functions and Naga customary laws to be used.
Currently Nagaland government is compiling the Naga customary practices for a common use in the state.
The current peace process is likely to conclude with a pact similar to 16 Point Agreement/memorandum of 1960, which gave birth to Nagaland state, wherein Article 371(A) has stated about customary practices, and land and its resources, belong to the people. The memorandum also came with the financial package.
This time round people are expecting another package agreement. While Naga groups are about to ink the Agreement, back home in the state people are less enthusiastic. Their only optimism is that they would be relieved of the demands, extortions, threat and intimidation.
Meanwhile, there are reports of recruitment of hundreds of young people by Naga groups ahead of the signing of the pact. There are videos circulating in social media about the recruitment drive in some camps of Naga groups.
Government has already asked Naga groups not organise a fresh recruitment drive. There are reports that the Union Government may absorb Naga militants into para-military forces and police after the agreement. (Page News Service)