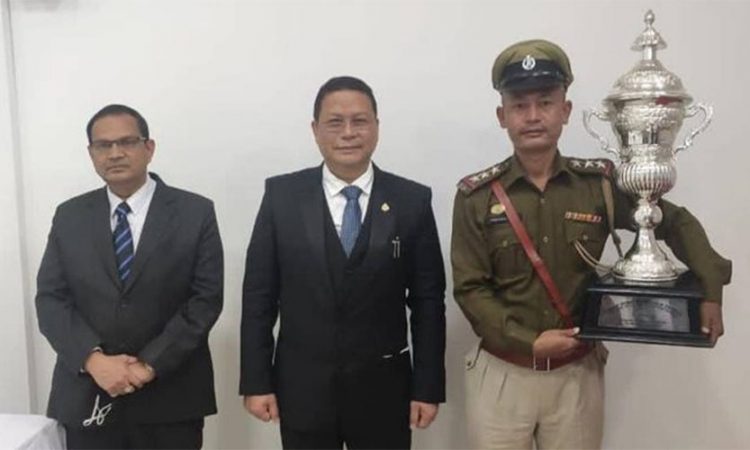 New Delhi, December 3: Nongpok Sekmai in Manipur’s Thoubal district has been selected as the best performing police station in the country, followed by AWPS-Suramangalam in Tamil Nadu’s Salem city and Kharsang in Arunachal Pradesh’s Changlang district, the Union Home Ministry announced on Thursday.

Among the top 10 best performing police stations for 2020, selected from India’s 16,671 police stations, are (rank-wise) Jhilmili (Bhaiya Thana) in Chhattisgarh, Sanguem in Goa, Kalighat in Andaman and Nicobar Islands, Pakyong in Sikkim, Kanth (Moradabad) in Uttar Pradesh, Khanvel in Dadra and Nagar Haveli and Jammikunta Town in Telangana’s Karimnagar district.
“The government of India selects the best performing police stations across the country every year, to incentivise more effective functioning of police stations and bring healthy competition among them,” a statement issued by the home ministry said.
This has been done in accordance with the directions of Prime Minister Narendra Modi, issued during the director generals of police conference in 2015 in Kutch, Gujarat.
The prime minister had directed that parameters should be laid down for grading police stations and assessing their performance based on feedback.
The announcement of the 10 best performing police stations was made at the ongoing virtual 55th annual DGPs and IGPs conference which is being attended by the prime minister, Union Home Minister Amit Shah, among others.
This year’s survey for the best police stations was conducted under challenging circumstances by the home ministry. It was difficult to access police stations located in remote areas during the coronavirus pandemic due to various restrictions on movement, the statement said.
Consequently, the survey was conducted in accordance with guidelines of the government, it said.
The home minister has said that a vast majority of police stations shortlisted from the thousands of police stations in the country are those located in small towns and rural areas.
“This is also true for those police stations which have been ranked among the top 10. This indicates that while availability of resources is important, more important is the dedication and sincerity of our police personnel to prevent and control crime and serve the nation,” Shah said.
The objective was to rank the top 10 police stations out of the 16,671 police stations in the country through data analysis, direct observation and public feedback.
The ranking process started with shortlisting of the best performing police stations in each state on the basis of addressing property offences, crime against women, crime against weaker sections, missing persons, unidentified found person and unidentified bodies.
The last parameter was introduced this year.
The home ministry said that the number of police stations selected initially from each state was three, it was two from Delhi and one each from each of the union territories.
Seventy-five police stations were selected for the next stage of the ranking process.
In the final stage, 19 parameters were identified to evaluate the standards of service delivery and identify techniques of bringing improvement in policing.
This part constituted 80 per cent of weightage in overall scoring. The balance 20 per cent was based on infrastructure of the police station, approachability of personnel and feedback of citizens.
The categories of citizens included those from nearby residential areas, nearby markets and citizens leaving police stations. Citizens who were approached for feedback included 4,056 respondents, covering approximately 60 people at each shortlisted location.
Every state participated in this year’s survey with full co-operation to complete it. The annual ranking of police stations recognises the hard work of police personnel, encourages police forces and also provides feedback on many aspects of policing in the country for future guidance.
It also provides a picture of the state of physical infrastructure, resources and deficiencies at the level of police stations. The annual exercise of ranking of police stations works as a constant guide for improvements, the statement said. (PTI)