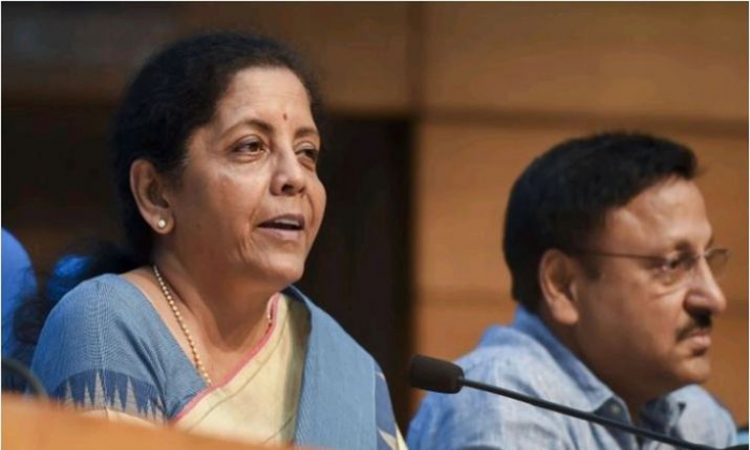 NEW DELHI, September 17: The finance ministry is working on one more booster dose to give a leg-up to the economy that has hit over six-year low of 5%, a senior finance ministry official said. The blue print for the stimulus is ready and would be announced by finance minister Nirmala Sitharaman in the next few days, the official said without giving further details.
The government announced a slew of measures in three dosages + which include a special window for real estate, export incentives, bank consolidation and sops for micro, small and medium enterprises (MSMEs) and the automobile sector.
Earlier this week, RBI governor Shaktikanta Das had said the government has taken a number of measures to boost the economy in three phases and indicated that more steps are likely.
“I think with right measures taken, things should improve. It’s a positive trend that the government is responding fast and I don’t think we have heard the last from the government with regard to dealing with the current economic situation… My expectation is that it will be a continuous process and they would definitely be dealing with other challenges,” he had said.
The first set of announcements was made on August 23 that included rollback of the enhanced surcharge imposed on foreign portfolio and domestic investors in Budget 2019-20.
Finance minister Nirmala Sitharaman on Friday announced withdrawal of ‘enhanced surcharge’ levied on foreign portfolio investors (FPIs) and restored the pre-Budget position. The move was very much anticipated from the Dalal Street which has been reeling under intense pressure following investors pulling out money.
Sitharaman had in her maiden Budget raised the surcharge on income tax paid by super-rich individuals.
The surcharge, levied on top of the applicable income tax rate, was hiked from 15% to 25% for those with a taxable income of Rs 2-5 crore, and to 37% for those earning more than Rs 5 crore. This increased the effective tax rate for these two groups by 3.12% and 7% to 39% and 42.74%, respectively.
Some 40% of foreign portfolio investors (FPIs) automatically came under the higher tax rate as they have been investing as a non-corporate entity, such as trust or association of persons (AOPs), which in the income tax law is classified as an individual for the purpose of taxation.
It was followed by announcement with regard to consolidation of 10 public sector banks (PSBs) into four on August 30.
According to the consolidation exercise, United Bank of India and Oriental Bank of Commerce (OBC) are to be merged with Punjab National Bank, making the proposed entity the second-largest PSB.
Syndicate Bank is to be merged with Canara Bank. Allahabad Bank will be merged with Indian Bank. Andhra Bank will be amalgamated with Corporation Bank and Union Bank of India.
This would be the second round of consolidation of PSBs. Earlier this year, State Bank of India had absorbed its five associate banks and the Bharatiya Mahila Bank to form the biggest public sector lender. In another merger, Bank of Baroda had taken over Dena Bank and Vijaya Bank.
Last week, the government announced a slew of measures to boost exports and the real estate sector.
The government announced a set of measures to boost sagging exports. Finance minister Nirmala Sitharaman unveiled steps to revive the sagging real estate sector and provide relief to homebuyers . The third booster shot for the economy came a day after the latest trade data revealed poor trade performance.
During the week, the finance minister will chair the 37th meeting of the GST Council, which is expected to discuss rate revisions for various sectors, including automobiles, fast-moving consumer goods, and hotels.
Besides, she will meet heads of the PSBs to discuss issues, including following up on transmission of monetary policy rates. (PTI)