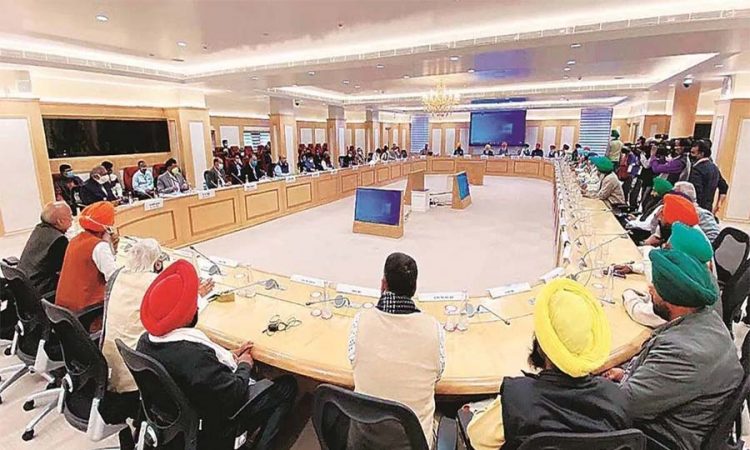 NEW DELHI, January 22: The government’s negotiations with representatives of thousands of protesting farmers hit a roadblock on Friday as the unions squarely rejected the Centre’s proposal to put three contentious laws on hold. The agriculture minister blamed external “forces” for their rigid stand and said no resolution is possible when the sanctity of agitation is lost.

Unlike the last 10 rounds of talks, the 11th round saw both the sides hardening their positions and could not even reach a decision on the next date for the meeting. The government asked unions to revert by Saturday in case they agree to the suspension proposal and the talks can continue only thereafter.
This followed a big climbdown made by the Centre in the last round of talks on Wednesday when it offered to suspend the laws for 1-1.5 years and form a joint committee to find solutions, in return for the protesting farmers going back to their respective homes from Delhi borders.
Farmer leaders, however, said they would settle for nothing less than a complete repeal of the laws, enacted in September last year, which they find pro-corporate, and a legal guarantee for the procurement of crops at government-fixed MSP (minimum support price).
‘Will intensify stir’
The unions said they will intensify their agitation now and alleged that the government’s approach was not right during the meeting. They also said their tractor rally will go ahead as per the plans on January 26 and unions have told the police that it is the government’s responsibility to maintain peace.
While the meeting lasted for almost five hours, the two sides sat face to face for not even half an hour. In the very beginning, the farmer leaders informed the government that they have decided to reject the proposal made in the last round of talks on Wednesday.
The three central ministers, including agriculture minister Narendra Singh Tomar, urged the union representatives to reconsider their stand, after which the two sides went for a break that lasted for more than three hours.
The break, during which the farmer leaders had their langar (community kitchen) food, also saw the 41 farmer leaders holding consultations among themselves, at times in smaller groups, while the three central ministers waited in a separate room at Vigyan Bhawan.
After the meeting, Bharatiya Kisan Union (Ugrahan) leader Joginder Singh Ugrahan said the discussions have broken down as the unions rejected the government’s proposal.
Another farmer leader Rakesh Tikait said the ministers said the suspension period can be increased to up to two years, but the unions remained firm on their demand for a complete repeal and a legal guarantee for MSP.
The ministers told the unions that they have been given all possible options and they must discuss internally the proposal of suspending the laws.
‘External forces at work’
Talking to reporters after the meeting, Tomar said the government has always maintained a sensitive approach towards farmers and their interest, but some forces were definitely at works to keep the agitation on and those forces certainly do not want farmers to benefit.
“No resolution is possible when the sanctity of an agitation is lost,” he said, while adding that no decision can be reached in the interest of the farmers if vested interests get an upper hand.
On whether he saw any division among the union leaders on the government proposal, Tomar did not give a direct reply but said, “We thanked all farmer leaders, including those who support our proposal and those who are against it.”
There have been reports that some unions were in support of the government’s proposal, but they decided to go with the majority view to reject the offer.
Tomar said the government will wait if there are some who think about the interest of the farmers and consider our proposal, the talks can be taken forward.
Asserting that the agitation involved people mainly from Punjab and some from a few other states, Tomar said the government always tried to respect farmer unions and wanted the discussion to continue in the right direction.
He said 11 rounds of talks have been held so far, including one by the government officials and the rest by three ministers.
“While farmer leaders were adamant on their demand for a repeal of the laws, the government tried to identify their concerns and offered many proposals, including some amendments to the laws,” he said.
“While the dignity was maintained during the talks, a sense to take a decision in the interest of farmers was lacking on the part of the unions. Therefore, the talks could not reach a decision. I also regret it,” he said.
Asked what options the government has if the unions do not reconsider the offer and intensify their protest, Tomar said, “We have given them all possible options. If they have a better option, except for the repeal, they can tell us,” he said.
Asserting that there cannot be a better proposal than the one made by the government, Tomar said, “We told the unions that they should re-consider it as this proposal is in the interest of farmers and of the country. Therefore we said we conclude the talks today. If you arrive at any decision, tell us tomorrow. We can meet at any place to announce that decision.”
The minister said the farm reform laws were passed in Parliament to bring a transformation in the agriculture sector, make farming profitable, end corruption and eliminate middlemen, help farmers grow high-value crops, and use new technologies to earn good profit.

On reports about the attack on farmers and their proposed tractor rally, the minister said, “I have been thanking farmers unions through media as well as in the meetings for holding a peaceful protest. I have expressed hope that the protest in the future should not be violent and there should not be any untoward incidents and they maintain discipline. This would be my expectation.”
Asked if the government is hopeful that farmer unions will come again for talks, Tomar said, “I believe one should always be hopeful. Asha se hi aasman tika hai (Hope holds the world together).”
On whether he sees the deadlock ending anytime, Tomar said: “What will happen tomorrow, I cannot speculate. I am not an astrologer. I am hopeful that farmer unions will consider our offer positively.” (PTI)