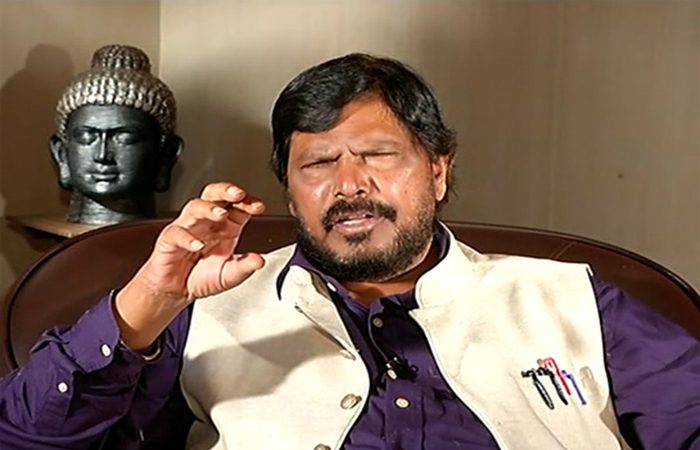 Hyderabad, July 14: The Centre is committed to protecting the SC/ST (Prevention of Atrocities) Act against any dilution and has filed a review petition on the Supreme Court’s order on the issue, Union minister Ramdas Athawale said today.
In a bid to protect honest public servants discharging bonafide duties from being blackmailed with false cases under the Scheduled Castes and the Scheduled Tribes (Prevention of Atrocities) Act, the Supreme Court on March 20 diluted its stringent provisions mandating immediate arrest under the law.
“The government’s role is to give full protection to the Act,” the Union Minister of State for Social Justice and Empowerment told reporters.
He said Union Social Justice and Empowerment Minister Thawarchand Gehlot is looking into the issue and an ordinance to protect the Act is also being thought of.
Batting for a law to protect reservation in promotions, Athawale, the president of Republican Party of India (A), said his party favoured providing quota to communities who are not socially backward, but economically weak, without touching the existing reservations.
“You don’t touch the reservation of SC, ST and OBC. But, you give reservation to those communities who are not socially backward, but those families (who) are economically backward. You can give reservation to these families,” he said, adding the total percentage of reservation can be increased for the purpose.
Athawale claimed that though several opposition parties are planning to come together against the National Democratic Alliance (NDA) for the Lok Sabha polls next year, they will not be able to make an impact as Prime Minister Narendra Modi is a strong leader.
Drawing a parallel with the Indian cricket team, he said, “Narendra Modi is Virat Kohli and I am Rohit Sharma.”
Taking a dig at Rahul Gandhi for his “safeguarding the Constitution” campaign, Athawale said there is no problem with the Constitution and the Congress president should try to save his party instead.
The TDP’s decision to pull out of the NDA was not a good one, he said, adding the party’s president and Andhra Pradesh Chief Minister N Chandrababu Naidu should return to the NDA fold.
The Union Minister also said the YSR Congress, led by Y S Jaganmohan Reddy, can join the NDA following the exit of TDP. (PTI)