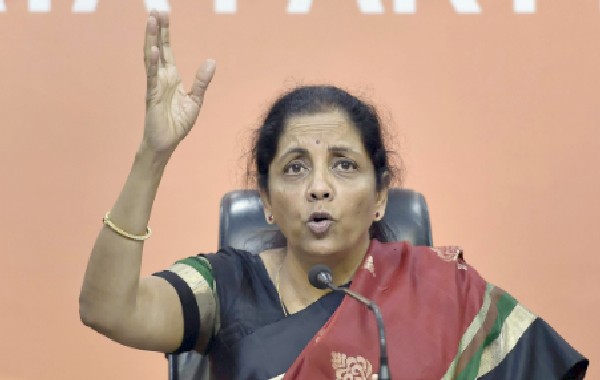 New Delhi, February 26: The government is keeping a close watch on the impact of coronavirus outbreak on the Indian economy and various options are being gauged at various levels, Finance Minister Nirmala Sitharman said on Wednesday.
The minister also said that the process of merger of public sector banks was underway as per the schedule. The government has announced to merge 10 state-run banks to create four big lenders.
The government is “closely monitoring” the impact of the coronavirus outbreak on the economy, she said.
“We are very closely monitoring it. Secretary-level officials are engaging with their respective industries. I had informed you about various options we have including airlifting raw material for some specific sectors, resourcing from other countries.
“All these are being worked at the concerned department level. We will have quick review of all departments coming back with specific help that they may require. We will collate all these and come back to you,” Sitharaman said.
Over 2,700 people have died due to novel coronavirus 2019 (COVID-19) while the number of those infected is around 80,000. In the wake of the virus outbreak, whose epicentre is China, many airlines, including Indian carriers, have cancelled some of their overseas flights.
On bank mergers, Sitharaman said there is “no uncertainty about bank merger” and the process is on as per the schedule.
Last year in August, the government announced merging 10 public sector banks into four. United Bank of India and Oriental Bank of Commerce are to be merged with Punjab National Bank, making the proposed entity the second largest public sector bank (PSB) from April 1 this year.
It was also decided to merge Syndicate Bank with Canara Bank, and Allahabad Bank with Indian Bank. Similarly, Andhra Bank and Corporation Bank are to be consolidated with Union Bank of India.
In April 2019, Bank of Baroda, in the first three-way merger exercise, amalgamated Vijaya Bank and Dena Bank with itself.
SBI had merged five of its associate banks — State Bank of Patiala, State Bank of Bikaner and Jaipur, State Bank of Mysore, State Bank of Travancore and State Bank of Hyderabad as well as Bharatiya Mahila Bank with itself effective April 2017. (PTI)