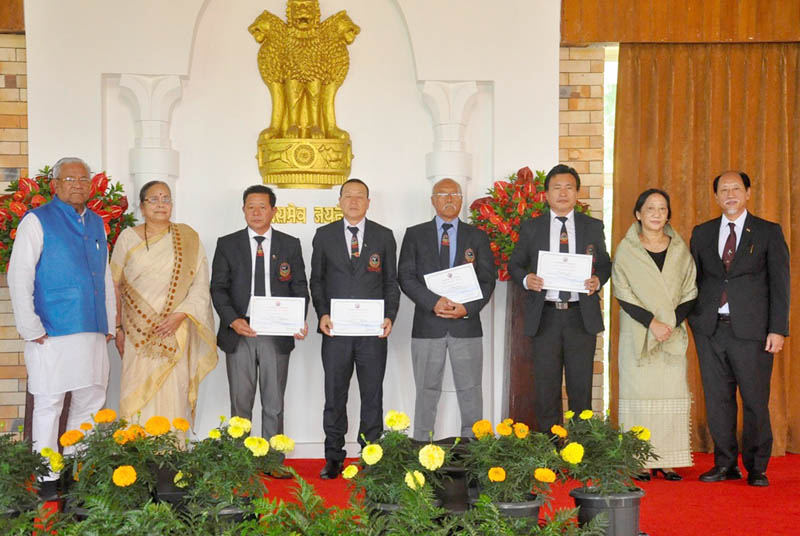 Dimapur, August 15: Dr Hosheto Y Chishi was awarded the Governor’s Award 2018 in the field of Art (Folk art) and four sisters from Chakhesang tribe – Mercy, Azi, Kuvelu & Alune Tetseo, popularly known as Tetseo Sisters, bagged the Governor’s Award 2018 in the field of Music (Folk).
Dr T Ao Sports Award
On the occasion, four sports personalities were also honoured by receiving the Dr. T. Ao Sports Award 2018 in recognition of their distinction in the field of sports. The awardees are Holshe Khrie-o – Sepaktakraw Coach; Hunezo Thisa – Archery Coach; Khriehutuo Tsira – Athletic Coach and I.Bendang – Sports Administrator.
The prestigious state awards to the winners were presented by Nagaland Governor BP Acharya at Raj Bhavan, Kohima during the 72nd anniversary of Independence Day.
The Governor and Chief Minister, Neiphiu Rio extended appreciation to the winners and expressed hope that their distinctive achievement would motivate and encourage young talents to accomplish distinction in the field of sports, music, art and literature.
Chief Minister exhorted the winners to be original, vigorous and consistent in their respective fields so as to scale greater heights. He said that state government has identified sports, music and art as an industry and the government is working vigorously for its promotion.
(Page News Service)