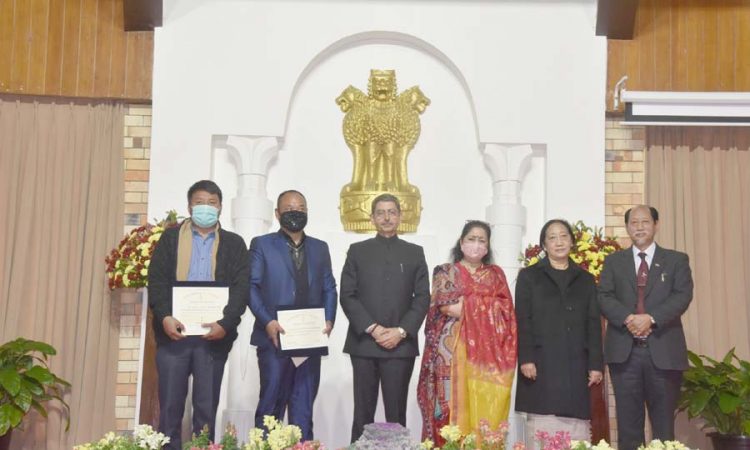 Governor, Chief Minister and their lady wives with the recipients of the Govenror’s Award at Dr Imkongliba Ao Hall, Raj Bhavan on January 26

KOHIMA, JANUARY 26: The joint councils of Fakim, Thanamir and Vongtsuvong villages in Kiphire district and ARK (Access to Rights & Knowledge) Foundation from Kohima were awarded the prestigious Governor’s Award at Raj Bhavan, Kohima on the occasion of India’s Republic Day.

This year’s award to the joint councils of Fakim, Thanamir and Vongtsuvong was in recognition for their ‘exceptional leadership in the conservation of the fragile ecosystem of Fakim Wildlife Sanctuary and Mt. Saramati area’; and ARK Foundation for their ‘commendable work on creating awareness and mitigation of social ills’.
According to Governor RN Ravi, “The institution of this award was rooted in the belief that there is enormous innate goodness in the society, and if they are harnessed, the society can progress.”
He said that like every individual is a mix of good and bad, in every society there are forces of good and forces which are not good. By harnessing the forces of good, we can do wonders, he added.
The nearest example, he said, is the way this country of over 130 crore population combated and faced the unprecedented COVID-19 crisis with collective goodness and confidence.
‘Prime Minister Narendra Modi galvanised the goodness of society among the people, and while there were ample reasons to get into the negative aspect of life, the way we have fared this crisis with relative ease is commendable,’ he added.
In a direct address to the recipients of this year’s award, Ravi commended their ‘phenomenal work in preserving the environment’. Similarly, ARK Foundation has been able to do so many great works in less than 10 years, he added.
According to him, acknowledging their achievements was essentially a message to all the groups of Naga society to take it to greater heights ‘because we all know Nagaland is enormously rich in natural resources and equally rich in human resources’.
Also speaking at the ceremony, Chief Minister Neiphiu Rio said he is aware that many villages and communities are protecting the environments and conserving the State’s rich bio-diversities. “And I hope others will do the same,” he added.
Rio said that for the last seven decades India has taken significant strides in its collective journey of progress and development and emerged as a contributing country amongst international communities in all aspects of human development.
Rio also expressed appreciation at the rise of India as a leader during the global pandemic by not only coming up with a vaccine but also exporting it to other countries. He stated that India has truly emerged as a powerful country that has lived up to its global responsibilities.
“I am confident that with early resolution of the Naga Political Problem, we will be able to make many contributions towards the rise of this great nation,” Rio said.
About the award winners
Fakim, Thanamir and Vongtsiiyong villages are situated close to the Indo-Mynanmar border in Pungro circle of Kiphire district. These villages are approximately 70-80 km away from the district headquarters. They are also located around the prominent Fakim Wildlife Sanctuary, which is home to many endangered species like Blyth’s Tragopan, clouded leopard, hoolock gibbon, etc.
The sanctuary is located very close to Mt. Saramati and it is important in terms of conservation in the state. The three village councils came together in February 2017 to create the joint council with the sole objective to conserve the flora and fauna of the area. The council has banned hunting, fishing and wanton logging in the area.
The three villages have also signed an MoU with the department of Forest for the creation of an Eco-Sensitive Zone (ESZ) within their community forest to act as a buffer zone for the sanctuary. They have also set aside areas adjoining the sanctuary as community reserves. Efforts are underway to declare these areas as Community Forest under the sanctity of Wildlife Protection Act 1972. The councils have also created an environment conducive for eco-tourism management and also given a means to the village youths and women to be part of the eco-tourism story in one of the remotest part of the country.
They conduct periodic checking to nab people who intend to harm wildlife within their area. The councils were also involved in conducting Blyth’s Tragopan survey along with the department officials and have been encouraging and supporting research activities in their jurisdiction, which is key for conservation. Due to their effort, there has been occasional sighting of sambar deer and barking deer in the village area and has drastically increased in numbers of various species of birds and animals.

ARK Foundation
ARK Foundation is a voluntary non-profit and Non-Governmental Organization (NGO) registered under the Societies Registration Act, 1880 established to address issues with focus on health, environmental and social aspects that affects individuals and society at large.
The foundation also focuses on the widening disparity in the society brought about by social challenges such as alcoholism and substance abuse, HIV/AIDS, hepatitis, unemployment, lack of capacity skill building programs and unequal distribution of economic resources and opportunities that affects socio-economic development.
Since its formation in 2013, ARK Foundation has been working tirelessly to create awareness about prevention and treatment of substance use and HIV and AIDS, viral hepatitis B and C and tuberculosis among key risk population, significantly among the vulnerable age groups comprising young adolescent and youths.
Even during the prevailing COVID-19 crisis, ARK Foundation has voluntarily catered to the needs of the key affected people, and also conducted a series of programs in similar lines in partnership with the Social Welfare Department, Government of Nagaland. (Page News Service)