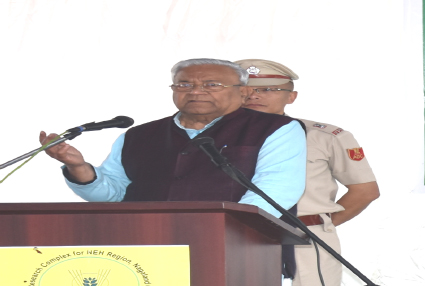 Medziphema, November 24: ICAR Research Complex for NEH Region, Nagaland Centre organized a “Sensitization programme for enhancing farm income and livelihood security in Nagaland”.
Governor of Nagaland P B Acharya graced the occasion as the chief guest and inaugurated the exhibition unit cum sale counter, mushroom spawn production unit and ornamental fish breeding and rearing unit.
Dr. D. J. Rajkhowa, Joint Director, ICAR Nagaland Centre in his inaugural speech highlighted the role and activities being undertaken by the ICAR for the development of agriculture and allied sectors in the state. He emphasized the farmers to adopt scientific way of farming for self- sufficiency of agriculture and allied sectors in a sustainable way.
The chief guest in his speech applauded the initiatives taken by ICAR and KVKs to uplift the socio-economic condition of the farmers through sustainable agricultural practices. He motivated the farmers and the entrepreneurs to be more pro active and to be self sufficient in all aspects.
He also requested agri and allied departments and all the agricultural universities to motivate and mould interested and promising entrepreneurs.
He also laid emphasis in bringing out at least five entrepreneurs from each district in various sectors and encourage the graduates to take up such venture. He further stressed that ICAR and Universities should work in collaboration, so that the benefit research and development reaches the interior mass.
Dr. G.D Rao, Dean, College of veterinary science, CAU, Jalukie also shared a brief remark on the role of institutes in the development of agri and allied sectors.
A farmers-scientist interaction programme was conducted wherein resource persons from ICAR Nagaland centre and KVKs addressed the problems raised by the farmers. Simultaneously, a technical session on Agri entrepreneurship Development in Nagaland was held where lectures were delivered by Dr. G kadrivel , Principal Scientist (PI- Agri Business Incubation ICAR Umiam), Dr. S. Ruth Assumi Scientist-Horticulture, and Ms Nilufar Sheikh NID-Guwahati.
Input in the form of Livestocks, seeds and farm machinery were distributed to the farmers and 11 nos of publication including extension folders and training manuals from the centre were also released by the Chief Guest. (Page News Service)