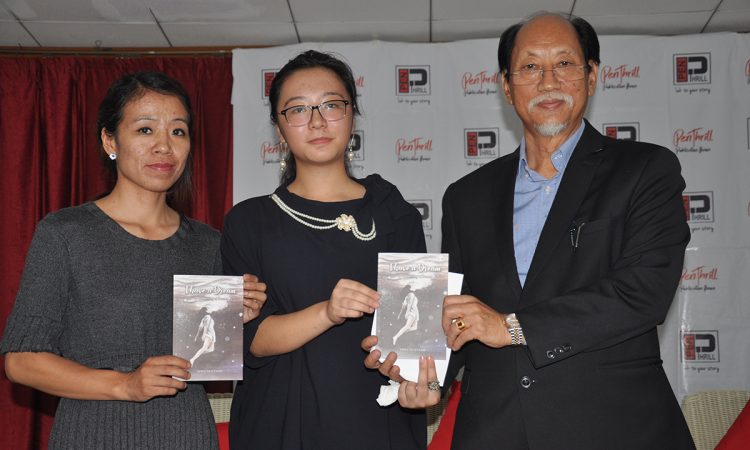 Releases 16-year-old Vingunuo’s I Have A Dream

KOHIMA, JUNE 28: Chief Minister Neiphiu Rio today said that the emergence of young minds who could pen their thoughts to ignite the minds of the readers were a matter of pride to Naga society since the advancement of intellect is a good indicator of a society.
Speaking at the release of the book I Have A Dream which is a collection of poems authored by 16-year-old Vingunuo Talie, the Chief Minister was overjoyed to see the zeal and enthusiasm of young talents who have dared to venture out into the public arena with the support and encouragement from family and friends.
“A society is intellectually empowered by the writings of its thinkers. The habit of penning down one’s thoughts and emotions, imagination, etc., is a great way to not only explore your talent, but it stimulates the author’s creativity and ignites the readers’ imagination. Writings are a powerful source of knowledge and wisdom,” Rio stated.
Regretting that the habit of reading had greatly dissipated with the advancement of technology and the internet, Rio however urged the people not to drop the habit of reading but rather take it up since “It is always a pleasure to read.” Identifying writing as a very important talent which gives credence to the adage “Knowledge is power”, the Chief Minister opined that dreams are endless and one has to continue to pursue one’s dream in order to turn it into a reality.
Presenting a brief background on the Government’s policy to promote artistes and writers, the Chief Minister stated that such disciplines are important for civilized life and urged the people to pursue it as a profession. Commenting on the Writers’ Meet which is to be held later this year, the Chief Minister assured that the Government is serious about promoting writers not only in the field of creative and literary works but also in documenting the rich culture and heritage of the Nagas so that national and international tourists can take back documented tales of yore with them.
Rio was of the opinion that since Nagaland is becoming a favourite tourist destination, it is important that Nagas are empowered with knowledge of our grand history and important events like World War I and World War II so that the same can be conveyed to visitors. “We have to showcase who we are and how we are,” the Chief Minister said and assured to read the book and said that he will look into ways through which such writers can be promoted
In her brief remarks, author Vingunuo Talie thanked God for His unfailing love which enabled her to pursue her dream. Stating that writing poetry was one of her greatest passion, Vingunuo said that she started writing since she turned 14 and that she draw inspiration from various instances around her. Terming her poems as a “collection of mixed emotions, love, pain and memories,” the young author disclosed that ‘Polestar’ was her first ever poem which she dedicated to the Almighty. It may be mentioned that she compares the light of the star to God’s light which shines down on everyone and that even though God may seem far away, He is always there watching down on us.
Further disclosing that the poem I Have A Dream was inspired from her experiences with failures, Vingunuo stated that one can only know the value of somethings when one loses it. She thanked her parents, family and friends who have been her greatest sources of encouragement. She extolled Vishü Rita Krocha, her publisher (Pen Thrill Publication House) for making this dream a reality and described her as “my best mentor.” Vingunuo also expressed heartfelt thanks to one of her closest friends Neingusanuo Kire for her illustrations and also to Ruokuo Dzuvichu for “bringing life in this book” with his illustrations
The Chief Minister was also taken by surprise when he was introduced to 10-year-old Sochumlo Suki Ezung, perhaps the youngest author in Nagaland who wrote Suki’s Magic Box, which was published last year. In her brief speech, Suki said that dreams give life to her imagination which comes alive in her writing. “What are dreams and imaginations for if they remain only in our mind?” she queried. She congratulated her senior in school, Vingunuo Talie for having her poems released and thanked the publisher for fulfilling her dream of enabling her to meet the Chief Minister.
In her brief address, publisher Vishü Rita Krocha stated that everything starts with a dream and related her experience with publishing which she said also started with a dream. She rued the days when there was no proper platform for aspiring writers but opined that it was worth the journey during which they have been able to publish many works by young, aspiring writers. “In publishing her book today, I also see one of my dreams as a publisher becoming a reality,” she said and added that each time a writer comes to her with dreams of getting their works published, she is always impressed with their works.
(Page News Service)