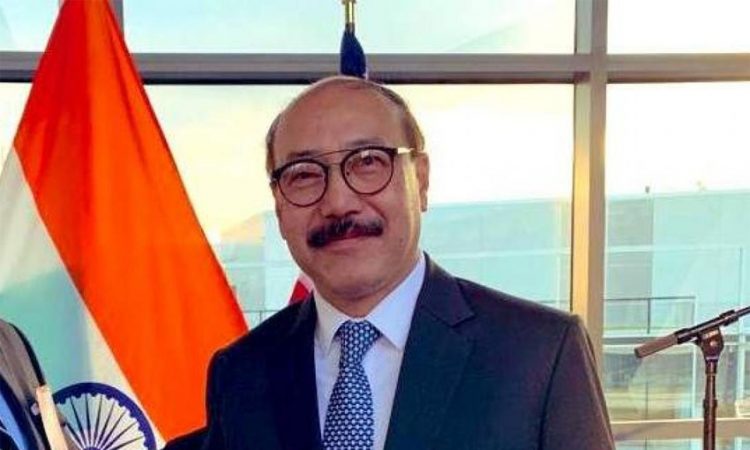 London, July 24: The UK-India dialogue on the roadmap towards accelerated talks on a free trade agreement (FTA), with an interim agreement factored in, is “going well” and will see “good progress” in the coming months, Foreign Secretary Harsh Vardhan Shringla said on Saturday.
At the conclusion of his two-day visit to London to take stock of the Roadmap 2030 agreed between Prime Ministers Narendra Modi and Boris Johnson in May, the Foreign Secretary said he held a range of meetings with UK interlocutors on the full spectrum of issues and does not foresee any roadblocks in the process.

A visit to India by Johnson is being considered around September, with Prime Minister Modi expected to visit the UK for the COP26 climate summit in November and Shringla’s visit is said to have been organised at short notice to keep up the intensive engagement ahead of those high-level summits.
There are several aspects to the roadmap, including the trade and investment aspect, where the Enhanced Trade Partnership envisages accelerated talks that can lead up to a comprehensive free trade agreement. The possibility of an interim agreement is also factored into that, Shringla told reporters.
Both sides agree those talks are going well. We will see some good progress in that regard, he said.
Asked about any roadblocks in the way of the Roadmap 2030 for closer UK-India ties, the Foreign Secretary noted: While here, we reviewed the entire range of issues and we didn’t find anything which is insurmountable. Most of it is what we can do to continue to maintain the momentum.
“The relationship is important enough for us to ensure there is focus at high levels, in both capitals.
The Indian High Commissioner to the UK, Gaitri Issar Kumar, added that the Indian mission in London remains very, very alert to any roadblocks and have been engaging day to day to ensure progress in the dialogue at all levels.

During his UK visit, Shringla held meetings with his counterpart in the Foreign, Commonwealth and Development Office (FCDO), Permanent Under-Secretary Sir Philip Barton, and FCDO Minister for South Asia Lord Tariq Ahmad.
He also held talks with David Quarrey, the UK Prime Minister’s International Affairs Adviser and Deputy National Security Adviser at 10 Downing Street, on the progress made since the two prime ministers’ virtual summit in May.
Prime Minister Johnson takes a lot of interest in the relationship and I was able to discuss with David Quarrey about where we were on the summit decisions and how we can take that relationship forward, said Shringla.
We discussed other issues, including our collaboration in the United Nations, in particular the Security Council, where India will be President next month and we have an ambitious agenda which I shared, he said.
Shringla revealed three major events planned for India’s presidency of the UNSC covering maritime security, the introduction of a new Peacekeeping app called Unite Aware, and counter-terrorism.
There was also a discussion on how the UK is supportive of our efforts to become a permanent member of the UN Security Council and how it can help us in the UN process, in particular the inter-governmental negotiations that we believe should be based on a text-based process, the Foreign Secretary said.
With reference to the regional issues covered, he said both sides noted concerns over the way the situation is developing in Afghanistan.
The discussions centred around the safety of diplomats and personnel and the fear of Afghanistan being used for radicalism and terrorism and what the implications of an imploding Afghanistan would mean for regional and global security .

Both sides were very clear that the gains of the last 20 years, whether it is in terms of the Constitution, the rights of the minorities, the empowerment of women, all of this needs to be preserved. There was a distinct sense that all these would be jeopardised where a power vacuum has been created with the withdrawal of US forces from the country, said Shringla, adding that there was agreement over the need for any interim power sharing structures to be achieved through negotiations as opposed to military means.
The Foreign Secretary also held talks with representatives from key UK-based think tanks and discussed the UK’s foreign policy focus on the Indo-Pacific region, including in the field of defence and security cooperation as well as climate change.
In our discussions, Indo-Pacific was something that came up often. We were also informed that certain terminology had changed from Asia-Pacific to Indo-Pacific on the UK side. So, there is a strong commitment there, there is clarity on the UK side that a free, open, transparent Indo-Pacific is something that both our countries are committed to trying to achieve, he said.

India, the US and several other world powers have been talking about the need to ensure a free, open and thriving Indo-Pacific in the backdrop of China’s rising military manoeuvring in the strategically vital region
China claims nearly all of the disputed South China Sea, though Taiwan, the Philippines, Brunei, Malaysia and Vietnam all claim parts of it. Beijing has built artificial islands and military installations in the South China Sea.(PTI)