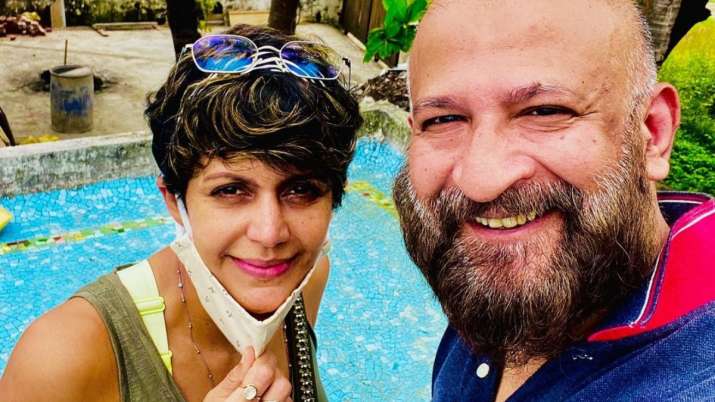 The director, who was in his 50s, is known for films like “Shaadi Ka Laddoo” and “Pyaar Mein Kabhi Kabhi”. He also produced Onir’s acclaimed drama “My Brother… Nikhil”.
“He passed away in the morning at around 4.30 am at his home. He had a heart attack,” Rohit Roy, actor and family friend of Kaushal, told PTI.
Kaushal was married to actor-host Mandira Bedi. The couple have two children, son Vir and daughter Tara.
His last rites were held at Shivaji Park crematorium, Dadar. Close friends from the industry including actors Ronit Roy, Sameer Soni, Ashish Chowdhry, and “Pyaar Mein Kabhi Kabhi” actor Dino Morea were present.
Warsi, who featured in Kaushal’s last directorial “Anthony Kaun Hai?” in 2006, took to Twitter to pay tributes to the filmmaker.
“Today I lost a very dear friend, my condolences to his family. Known Raj Kaushal, for years, done a film with him, enjoyed every minute of his company. I have never seen a frown on his face, he was always smiling, always there if you needed him will miss you brother RIP,” the actor wrote.
Onir, who was one of the first people from the industry to pay condolences on social media, remembered Kaushal for trusting and backing his 2005 directorial “My Brother… Nikhil”.
“Gone too soon. We lost Film maker and Producer @rajkaushal1 this morning. Very Sad. He was one of the producers of my first film #MyBrotherNikhil. One of those few who believed in our vision and supported us. Prayers for his soul,” the director tweeted.
“Awfully sad waking up to the news of our colleague Raj Kaushal’s passing away. Too young to be gone,” wrote Mehta.
On Sunday, Kaushal had shared a picture on his Instagram of a get-together with friends from the industry, including Dhupia, actors Angad Bedi, Chowdhry, Sagarika Ghatge and former cricketer Zaheer Khan.
Sharing the same picture on her Instagram page, Dhupia said she was devastated.
“Raj, we took this picture to create more and more memories… Can’t believe you are not with us anymore… Mandira, my strong strong girl, I am at a loss of words. My heart belongs to Vir and Tara… I’m shaken up and in shock and disbelief as I write this, RIP Raj,” she wrote.
Actor Divya Dutta, who worked with Kaushal in the 2004 comedy “Shaadi Ka Laddoo”, wrote “Gone too soon Raj!! RIP.”
Actor Boman Irani said he was shocked and saddened by the passing of Kaushal.
“May the Lord grant #mandirabedi and the family the strength to bear this loss,” Irani added.
Actor Kubbra Sait said it was a “sad day” and tweeted that Kaushal’s “optimism and love” would linger on.
“Heard the terrible news about @rajkaushal1 . May your Jar of Hope always be filled in the afterlife as it was here. I will miss you terribly. Strength to the family and friends,” filmmaker-host Roshan Abbas wrote.
Actor Rahul Dev also took to Twitter and wrote, “He was one hell of a nice guy… Raj Kaushal you shall be missed. Gone too early… rest in peace,” he added.
Actor Tisca Chopra said she was yet to come to terms with the news of Kaushal passing and sent her condolences to his family.
“Cannot believe #RajKaushal isn’t with us any more… just so shocking. My hear goes out to @mandybedi and her two lovely kids #RIP our happy smiling Raj.. your gentle soul will be missed,” Chopra said. (PTI)