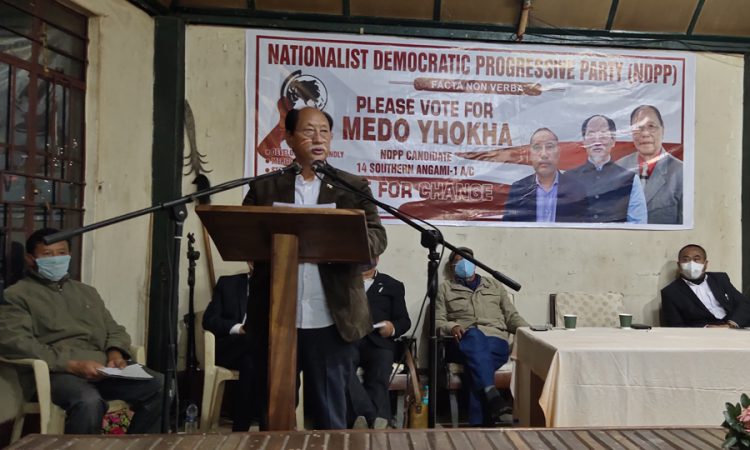 Kohima, October 26: Nagaland Chief Minister Neiphiu Rio said that the Government of India is sincere to resolve the vexed Naga political issue and it is also trying to find ways to constitutionally allow Nagas use of separate flag while separate committee would be set up for framing of ‘ Yehzabo’ post solution.
“The Central government is working hard to bring about a solution to the Naga issue while the Naga public also wants peace and unity to come through a permanent solution so that we can have development and open up avenues for youths,” said Rio.
The Chief Minister said this while wooing electorates during two separate rallies for Medo Yhokha, PDA consensus candidate for bye-election to 14-Southern Angami-I Assembly seat in Kohima district at Jakhama and Phesama villages on Saturday night.
Lamenting the June 16 Governor RN Ravi’s letter to him, Rio said the Governor described the Naga political problem as law and order problem and the Naga nationalist workers as ‘extortionists’, ‘gun totters’ and ‘anti-social elements’ while also indirectly threatening to impose President’s Rule as he had warned that he would promulgate Article 371A(1)(b) of the Constitution, which gives the Nagaland governor special responsibility with respect to law and order, if things did not improve.
The Governor had written that the popular elected Government cannot appoint the Deputy Commissioners, SPs, Head of Department, DGP and Chief Secretary without his approval, Rio pointed.
Expressing that several Naga organizations and the general public had supported the Governor’s letter even as it had ‘insulted’ the Nagas, Rio said he had apprised the Naga underground workers saying that the general public are supporting the Governor’s letter as they (underground groups) were unable to bring about a lasting solution.
The State government is having discussions with the groups to make sincere efforts for a lasting and honourable solution and also not to indulge in anything which would attract public disrespect, he said.
The CM also said that the state government has also approached National political leaders, Prime Minister and Home Minister for an early solution to the vexed problem.
Elucidating on the Naga movement started by the Naga National Council (NNC), Rio said “the NNC movement was not a failure… It may not have been 100 percent to the expectation of the people but was a success, because the Government of India recognized the Naga history, tradition and culture as ‘unique’.
It also accepted that the ‘Naga issue is not a law and order problem but a political and therefore political talks are being held to resolve the issue’, he said.
“The NNC movement brought about partial success, but being in the Indian Union, currently a single-paged Framework Agreement has been signed while competencies are being worked out,” he said.
The talks are in the final stage, except for the NSCN(IM) demand for separate flag and constitution, said the CM.
Nonetheless, Rio said during his recent visit to Delhi he met the Union Home Minister, Home Secretary, Director IB, Constitutional and Legal experts, wherein it was informed during the discussions that though Nagas cannot be given total freedom and will have to continue to remain in the Indian Union the Central government is trying to find out ways to constitutionally allow use of separate flag.
On having a ‘Naga  Yehzabo’ (constitution), Rio said Article 371(A) of the Indian Constitution grants special provisions but to frame a proper constitution for the Nagas a committee would be set up post settlement, Rio said.
The present  Yehzabo brought out by the Naga groups is about the survival of Nagas during insurgency and militancy period but presently being under a democracy, a democratic norms have to be followed.
He also said that the 16-Point Agreement had brought about statehood to Nagaland but it needs to be upgraded by increasing the number of seats of Parliament, State Assembly seats, having an Upper House and Pan-Naga Hoho. All these issues have been discussed, Rio informed.
Rio said while maintaining that the recent consultative meeting on Naga issue organized by the State government in Kohima has resolved that “Nagas are one, the issue is one, and so we need one solution’.
Another issue is about integration of Nagas, who have been divided into different states, he said the Central government has said that it cannot be imposed but would be done through democratic process.
Further, the Chief Minister also informed that the state government would go ahead with implementation of the delimitation exercise so that justice would be delivered to the electorates for equal representation in the State Assembly.
“The exercise was to be done in 2001 but was unable to and till now it has been pending, but now we want to implement it by any means,” he said while citing some districts have more MLAs than the actual requirement.
“The present government is serious about finding a solution to the Naga issue, implementing delimitation exercises and improving the economic condition of the Naga people so as to be at par with the rest of the country,” Rio said.
In this, the Chief Minister said that the electorates should have their own representative in the ruling government and be able to speak for their welfare. Rio therefore appealed to the electorates to consciously vote for the NDPP nominee to win with a huge margin.
NDDP candidate Medo Yhokha while asserting to work for the welfare of the people appealed to the villagers to grant him the opportunity to be their representative in the State Assembly.
NDPP star campaigners including its president Chingwang Konyak, vice president Menuovilie Kesiezie, Minister for Planning and Coordination, Land Revenue and Parliamentary Affairs Neiba Kronu, Advisor for Urban Development and Municipal Affairs Dr Neikiesalie Nicky Kire also appealed the electorates to cast their vote in favour of Yhokha. (Page News Service)