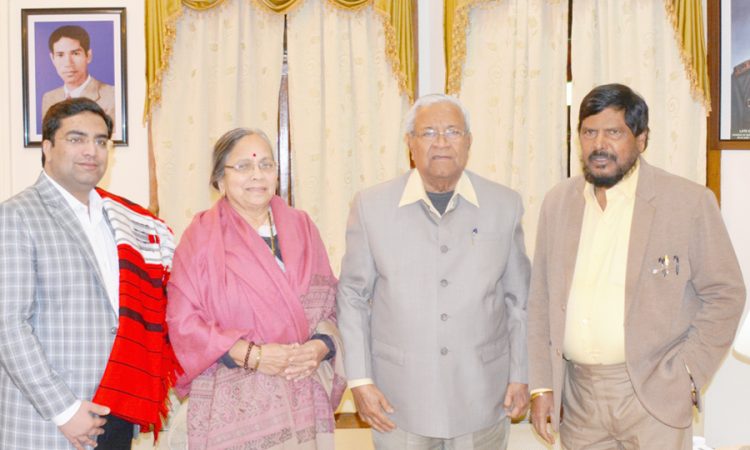 Governor of Nagaland, PB Acharya with Union Minister of State for Social Justice & Empowerment Government of India, Ramdas Athawale (right) at Raj Bhavan Kohima on February 18. The MoS called on the Governor during his visit to the State.

Kohima, February 18: Union Minister of State for Social Justice and Empowerment, Ramdas Athawale on Monday said that the Government of India should reconsider the passage of the Citizenship Amendment Bill (CAB) 2016 as it is connected with the sentiments of the people of the North East region.
Addressing media-persons at Dzukou Hall in Raj Bhavan here tonight, Athawale, who is also the president of Republican Party of India – Athawale (RPI-A), said, ” Government of India passed the bill and as a partner of the National Democratic Alliance (NDA) government my party also supported the Bill”.
Nonetheless, Athawale, who is the first Union Minister to be visiting Nagaland after the passage of the Bill in Lok Sabha said, “but if the people of NE are opposing the bill, definitely as a member of the NDA, I can discuss with Prime Minister if any changes can be made (on the bill).”
“We should think about the sentiments of the people of the North East and rethink and reconsider about the bill because the sentiments of the people of NE are also very important and that is the stand of my party, he said.
Athawale is in Nagaland to official launch his party in the State tomorrow in Dimapur. He was also supposed to launch the distribution of assisted devices and appliances for empowerment of Persons with Disabilities and also senior citizens at Mon district but was unable to reach due to bad weather condition.
The RPI(A) chief expressed confidence that the Prime Minister Narendra Modi led NDA will return to power after the forthcoming Lok Sabha polls.
Modi is a clean Prime Minister while the present Government is also clean, he said while claiming that the present government has been sincerely working towards the welfare of the people of the country.
Meanwhile, he also announced that his party in Nagaland will support the candidate set up by the PDA government.
He also said that the entire opposition led by Congress coming together against Modi in the LS polls will be in vain.
Athawale also highlighted about the various schemes implemented in the State through his Ministry, especially for the welfare of the People with Special Needs and Senior Citizens.
In this, he asserted that the pending demands for setting up of at least two more District Disability Rehabilitation Centres under the Deendayal Upadhyay Rehabilitation Scheme for Nagaland and also other such projects for the welfare of the disabled persons and senior citizens. (Page News Service)