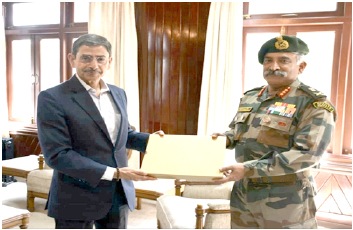 Dimapur, March 4: General Officer Commanding Spear Corps called on RN Ravi, Governor of Nagaland on March 2 at Raj Bhavan, Kohima and discussed the security situation in the State as well as issues on the Indo Myanmar border.
The Corps Commander apprised the Governor of the actions being taken by the Indian Army and Assam Rifles in coordination with State agencies in maintenance of peace and tranquility in the State.
The Governor lauded the untiring efforts of the Armed forces in difficult conditions and complemented them for their people friendly initiatives.
The GOC assured the Governor of continued assistance of Army and Assam Rifles to the people of Nagaland for achieving lasting peace, development and prosperity, informed a defense release.
(Page News Service)

Govt on utilization of volunteers’ service