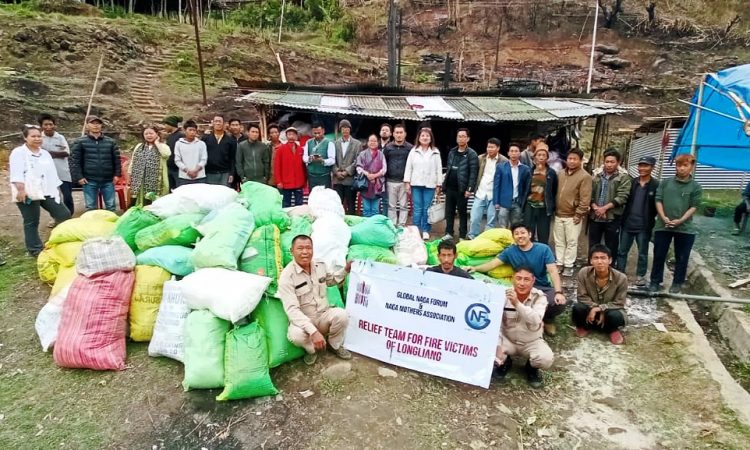 Dimapur, April 25: Responding to appeal from Naga leaders in Arunachal Pradesh, the Global Naga Forum and the Naga Mothers Association started a donation drive and handed over a cheque of Rs 2,00,758 and cash of Rs 10,000 to the Raja and village Council of Longliang village (Khonsa district) in aid of fire victims.

A joint press release from GNF and NMA on Sunday stated that a 6-member relief team had left for Khonsa on April 17. “Accompanied by Arunachal Naga leaders, the relief team visited the devastated village of Longliang, high up the mountainous region on the Myanmar border on 18th April morning and handed over the cheque,” it informed.
Also, 98 sacks containing clothes, shoes, blankets, utensils, rice, salt and essential items were handed over to the Village Council Relief Committee, it added.
The Raja and village council leaders conveyed their deep gratitude to GNF and NMA and all generous donors who had sent help, it informed. The relief team was led by Dr. Rosemary Dzuvichu and Abeiu Meru of the GNF/NMA, Pastor Adahe Nelli, GNF, Yapang Longkhumer, GNF, Gugu Haralu, GNF and Tongpang Longchar, GNF.
“The GNF/NMA is deeply indebted to all our member donors from across the world, our families and friends, and Naga leaders, who came forward to help the fire victims. We are grateful to the Deputy Chief Minister and DGP, Nagaland, for helping the relief team with the transport to carry the relief materials to Arunachal. We are indebted to the Police drivers of the vehicles who travelled to such a distance on the humanitarian mission. We also place on record our deep gratitude to GNF members of Arunachal, former Home Minister James Wanglat and Gawang, women leader Lungya and other Naga friends who arranged local hospitality, received us with such warmth at Khonsa and accompanied the relief team,” it added. (Page News Service)