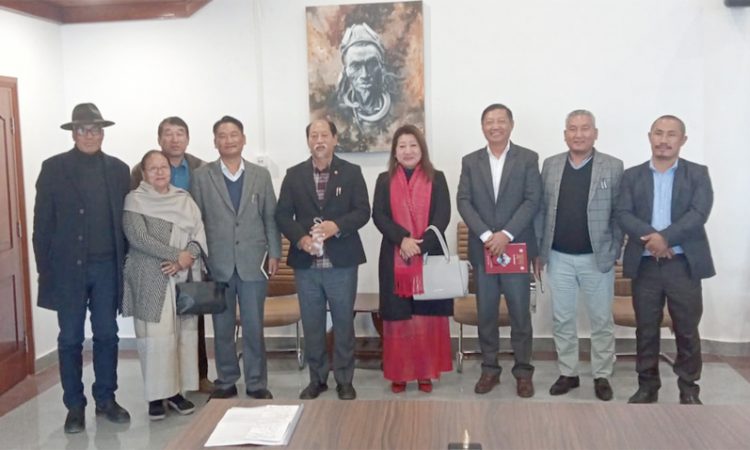 Urges CM to ‘put an end to Ravi’s authoritarian orders’

Kohima, February 10: Against the backdrop of Nagaland Governor’s order to initiate criminal proceedings against State Government employees who write “seditious and subversive” posts on social media platforms, the Global Naga Forum (GNF) has urged Chief Minister Neiphiu Rio and his Cabinet not to initiate disciplinary actions against Government employees on the basis of Governor’s version of sedition.

The GNF made the appeal in a memorandum submitted to the Nagaland Chief Minister after a meeting with him on Wednesday. The meeting lasted for over an hour and half.
The memorandum urged the CM “to put an end to the governor’s undemocratic, extremely authoritarian orders against Naga employees who are not committing any punishable crime for exercising their right to speak truth to power, without advocating any violence, by asserting the Naga people’s basic right of political self-determination.”
Registering strong resentment against what it alleged is the undercurrent politics being played by the Centre’s interlocutor and Governor, RN Ravi, the memo said, “From our perspective, the Indo-Naga relationship has reached a dangerously volatile point specifically because of Governor R. N. Ravi’s extremely divisive and provocative manner of running the office of the Governor of Nagaland State, not to talk of his role as Interlocutor of the peace talks.”
The GNF was referring to the Governor’s two recent orders – “Order requiring state government employees to provide the list of their relatives who may be connected to NPGs” and “Order to initiate action against state government employees for “sedition” against India for asserting the right of the Naga people to political self-determination.”
“We see the present scenario of the Indo-Naga relations and Governor Ravi’s autocratic role in it this way. A country takes over control of a free people, and having created a political system where the people have hardly any other way to make a living except by working for the government, turns around to punish and prosecute its employees for “sedition” against the Indian government for saying that Nagas have a right to self-determination, while the same government imposes military laws on the people with whom it engages in peace negotiations. In addition, the Interlocutor between the government and the Nagas, who is also the Governor of Nagaland State, orders the prosecution of the employees for sedition against India, and has made dividing the Nagas his main role as governor, because he is a functionary of the Government of India,” alleged the memorandum.
The GNF asked: “Who is supposed to run the state government? Elected Representatives or the titular head of state, the governor? And if the Governor goes steroids on Art 371 (A), as he clearly has, we wonder if the same Article cannot be used to remedy the problem, since Nagas too can invoke it in favor of customary laws? It should be possible for the local tribe on which the governor’s residence stands to enforce its traditional customs on the offending governor.”

Reminding that the Indo-Naga political problem is yet to be resolved to the satisfaction of both sides, and Ravi is still the interlocutor and therefore the facilitator of the negotiations, the GNF maintained that for the Interlocutor and Governor to charge State employees with sedition for expressing their views in democratic avenues, peacefully, is a public provocation on his part.
“He is adding insult to injury, and thereby inciting discord and societal breakdown in the state,” it claimed.
The forum also expressed surprised as to why the Governor should mark Dr Inato Jimomi alone among thousands of Government employees who are equally vocal towards “Nagas inherent political rights”.
(Page News Service)