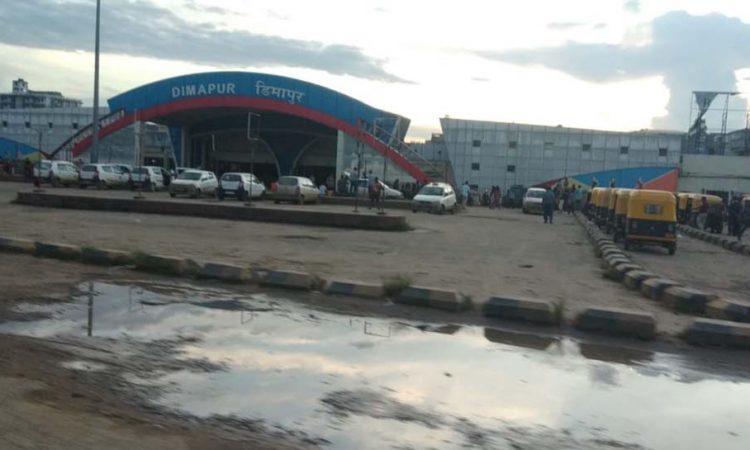 Dimapur, August 4: Passengers’ safety and security at Dimapur Railway Station is under serious threat with the Northeast Frontier Railway (NFR) not putting in place any semblance of security measures in the station, which is the second highest revenue earner after Guwahati for NFR.
NFR authorities clearly seem to have not learnt any lesson from the powerful bomb blast that ripped the Dimapur railway station on October 2, 2004 killing 15 people on the spot and injuring more than 60. Or maybe it is waiting for another tragic bomb blast in the station to start fixing things.
As of now, passengers at the station remain soft targets due to the gaping security lapses and the callousness of the NFR is putting at risk the lives and limbs of nearly 5000 passengers that throng the station every day.
The biggest concern area is the CCTV cameras installed at the railway station. There are only 5 CCTV cameras installed in the station, which are not properly functioning.
Talking to Nagaland Page, office in-charge of Government Railway Police Station (GRPS), Zubenthung Ezung said there are 5 CCTV cameras installed at the Dimapur railway station but it is redundant.
“It very unfortunate that the five CCTV points are properly not functioning and while going through the footages we are unable to see properly and it is difficult to detect criminals”, he said. In case of any happenings within the railway premise, the GRPF and RPF are unable to investigate because the working capacity of the 5 CCTVs are very low and the recordings are also not available, he said.
“Even in the main station area the footage recorded are not clear at all and this is a very serious security lapse”, he said and urged the railway authorities to immediately install more sophisticated CCTV cameras within the railway station perimeters and at all the exit and entry points.
It is to be mentioned that the CCTV installed in the railway station falls under the RPF and while enquiring on the CCTVs functioning, many didn’t want to speak citing that they are not authorized to speak.
Another concern is that the luggage scanners installed at the entrance of the railway station is also not functioning. There are also not enough handheld detectors.
Zubenthung said the luggage scanners installed at the entrance is not functioning at all and he had already requested authorities to either repair or replace it with a better one. I have also asked for more handheld detectors and that door metal detectors should be fitted in all the points, he said.
“In terms of security measures, the Dimapur Railway station drastically suffers from many loopholes despite being the second highest revenue-earning stations in the Northeast next to Guwahati railway station”, he said.
On a positive note, Zubenthung said crime rate in the station has been minimized to a great extend and the police are now focussing more on prevention part. “Since one year, we have taken lots of preventive measures, 21 cases were registered last year and this year till date 13 cases have been registered. We minimized crime rates so far and more needs to be done, he said while informing that majority of the cases relates to NDPS, snatching, pickpockets, etc.
On the boundary related issues, he said railway authorities should erect fencing walls on railway properties at the earliest and entry and exit points should be notified. “At present, people throng inside the railway station from many points and this is a matter of serious security concern,” he said, adding if the railway authorities erect fencing walls with notified entry and exit points, many crimes can be prevented.
“Like airports, the railway station’s perimeter needs to be fenced. We cannot compromise on it. It is a national property and also prone to many terrorist attacks earlier,” he said while recalling the 2004 bomb blast in the station. He also informed that on February 20, 2013, one person was killed in a bomb blast close to the railway station.
“We cannot rule out that such incidents may not recur again. If it happens how are we going to deal with it,” he asked.
On the menace of begging in the railway station, the OC said although he has a soft heart for the deprived but they creates nuisance and disturbs the passengers. “We send them off to other places but if we send ten of them, hundred more beggars land up again from nowhere. Even pick-pockets are donning the gowns of beggars nowadays”, he revealed.
On the jurisdiction of the GRPF Dimapur, Zubenthung said it has approximately 9 km stretch from Khatkhati till Rangapahar under its jurisdictions and the stretch is being constantly monitored physically.
On the crowded railway reservation counter, he said, “The queues are quite far and there are no regulations, there should be proper queues and ladies should be provided with a separate counter. It is all mixed up now. It should be streamlined and there should be decorum”.
On the condition of the five platforms in the station, he lamented that out of five platforms only one is having shed and people faces lots of difficulties during the arrival and departure of trains. “No one wants to wait in any of the four platforms because all are roofless. Due to rainfall and sun heat, people always assemble at the main platform and only on the arrival of the train they rush out there which creates an unruly scene very often,”
Zubenthung informed that requests were made to railway authorities long time back to construct roof on the remaining platforms and it is not known why these basic things are not being taken up. The law enforcement agencies manning the station face unnecessary hardships along with the people too, he said
The OC also mentioned that the main platform is having a shed but when it rains, water from the roof seeps in causing inconvenience to the commuters.
“Dimapur railway station is in a sorry state unfortunately,” he added. (Page News Service)