Give us the date now: Uddhav Thackeray dares BJP govt on Ram temple 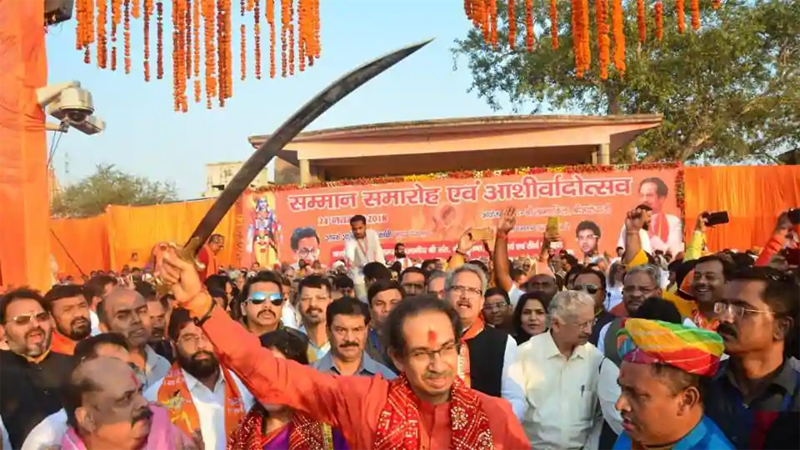 Ayodhya, November 24: The BJP-led governments at the Centre and Uttar Pradesh are in majority and must give a date by which the construction for the Ram Temple will begin in Ayodhya town, Shiv Sena chief Uddhav Thackeray said on Saturday as he reiterated his party’s demand for the shrine at the disputed site.
“You have to tell us the date, the rest can follow. I want the date today,” Thackeray said while addressing a gathering at Laxman Quila.
“How many years will we have to wait? Generations have gone by … During Atal Bihari Vajpayee’s time, it might have been little difficult (to build the temple) but today’s government is powerful… If you want to bring in an ordinance bring it or if you want to make a law, do it,” he said in Hindi.
Thackeray’s visit is a part of Sena’s campaign for the building of the Ram Temple at the disputed site in Ayodhya. Hindus believe the 16th-century mosque, Babri Masjid, was built over a temple dedicated to Hindu god Ram, whose birthplace is also considered to be at the site. The mosque was demolished by a mob of thousands in 1992, triggering a cycle of violence and riots across India.
“It is not important to have a big chest. But you should have a heart in your chest,” Thackeray said in a comment directed at Prime Minister Narendra Modi.
The Sena chief asserted he had to come to Ayodhya to wake up Kumbhakarna, who he said, has been sleeping for the past four years.
“The Kumbhakarna slept for six months. But this Kumbhakarna (the Modi government) is sleeping for the past four years,” Thackeray said referring to the mythological character in the Hindu epic Ramayana.
“I have not come here to fight with anyone or take credit for construction of the Ram Mandir. You (BJP) construct the temple and take credit,” Thackeray said.
The Shiv Sena chief said the Modi government has not sought a court’s permission to bring demonetisation, asking, “Now, for Ram Mandir why you are waiting for court’s order?”
Hindu groups, including the Bharatiya Janata Party’s ideological mentor Rashtriya Swayamsevak Sangh, have called for a law or an ordinance to facilitate the building of a temple at the disputed site. The RSS has also threatened a 1992-like campaign for its construction.
Talk of the government considering an ordinance or a bill to construct a temple in Ayodhya in the remainder of Parliament’s term has gained momentum after the RSS’ demand.
The dispute – among India’s most sensitive and divisive political issue – has slowly returned to the political centre stage over the past few months. The Supreme Court has turned down the Uttar Pradesh government’s request to expedite hearing the land title dispute case and pushed the hearing to January next year.
The Shiv Sena, which is part of the National Democratic Alliance (NDA) but has had strained ties with ally BJP, has also demanded an ordinance and declare a date for the construction of the Ram temple. It has claimed it has the support of more than 400 members of Parliament cutting across party lines for the ordinance.
And on Friday, senior Sena leader Sanjay Raut pushed it a little further.
“The Babri mosque was demolished in 17 minutes … How long does it take to prepare papers… to bring ordinance… from the Rashtrapati Bhawan to Uttar Pradesh assembly… They are all BJP governments,” Raut said. (Agencies)