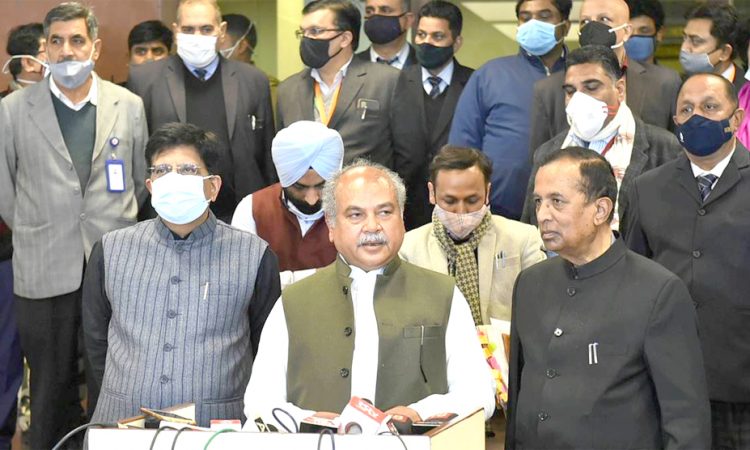 New Delhi, January 17: Ahead of the tenth round of talks scheduled on January 19, Agriculture Minister Narendra Singh Tomar on Sunday again urged the protesting farm leaders to give up their “stubborn” stand on the new farm laws and come for a clause by clause discussion.

“Now that the Supreme Court has stayed the implementation of these laws, then there is no question of being stubborn,” Tomar told reporters before leaving for his home constituency of Morena in Madhya Pradesh.
The government wants farmer leaders to come for clause by clause discussion at the next meeting on January 19. Except for the demand of repealing the laws, the government is ready to consider “seriously and with an open heart” other alternatives, he said.
Tomar, who left for his constituency by Hazur Sahib Nanded-Amritsar Superfast Express, was seen sharing langar from co-passengers of Sikh community — a gesture which comes amid the ongoing protests by farmers from Punjab against the agri laws.
The Supreme Court on January 11 had stayed the implementation of the three laws till further orders and appointed a four-member panel to resolve the impasse.
Tomar said the government offered certain concessions, but the farmer leaders have not shown flexibility and were constantly demanding a repeal of the laws.
He reiterated that the government makes laws for the entire country. Many farmers, experts and other stakeholders have supported the laws.
So far, the nine rounds of formal talks between the Centre and 41 farmer unions have failed to yield any concrete results to end the long-running protest at Delhi’s borders as the latter have stuck to their main demand of a complete repeal of the three Acts.
SC-appointed panel on farm laws to hold first meeting on Jan 19
The Supreme Court-appointed committee on the three new farm laws is scheduled to hold its first meeting on January 19 at Pusa campus here, one of its members Anil Ghanwat said on Sunday.
The Supreme Court had on January 11 stayed the implementation of the three laws, against which farmers are protesting at Delhi borders for over 50 days now, till further orders and appointed a four-member panel to resolve the impasse.
Bhartiya Kisan Union president Bhupinder Singh Mann, however, recused from the committee last week.
Apart from Ghanwat, agri-economists Ashok Gulati and Pramod Kumar Joshi are the two other panel members.
“We are meeting on January 19 at the Pusa campus. Only members will meet to decide the future course of action,” Ghanwat, President of Shetkari Sanghatana (Maharashtra), told PTI.
One of the four members has backed out of the committee. If the apex court does not appoint a new member, the existing members will continue, he said.
The committee has received the terms of reference and will begin the work from January 21 onwards, he added.
Asked about the government holding parallel talks with protesting farmer unions after the setting up of the SC panel, he said, “We have no issue if a solution is found and the protests end from either (efforts of) our panel or from the government’s separate talks with the protesting farmer unions.”
“Let (Government) them continue the discussion, we have been given a duty and we will focus on that,” he added.
The Supreme Court is scheduled to hear on Monday the pleas relating to the controversial farm laws and the ongoing farmers’ protest at Delhi borders. It may take into account the matter of recusal of the member from the panel.
The top court would also hear the plea of the central government, filed though the Delhi Police, seeking an injunction against a proposed tractor march or any other kind of protest by farmers that may disrupt the Republic Day celebrations on January 26.
So far, the government has held nine rounds of formal talks with 41 farmer unions but has failed to break the logjam as the latter have stuck to their main demand of a complete repeal of the three Acts.
In the last meeting, the Centre had suggested that the unions constitute their own informal group to prepare a concrete proposal on the three farm laws for further discussion at their next meeting on January 19 to end the long-running protest at various Delhi borders. (PTI)