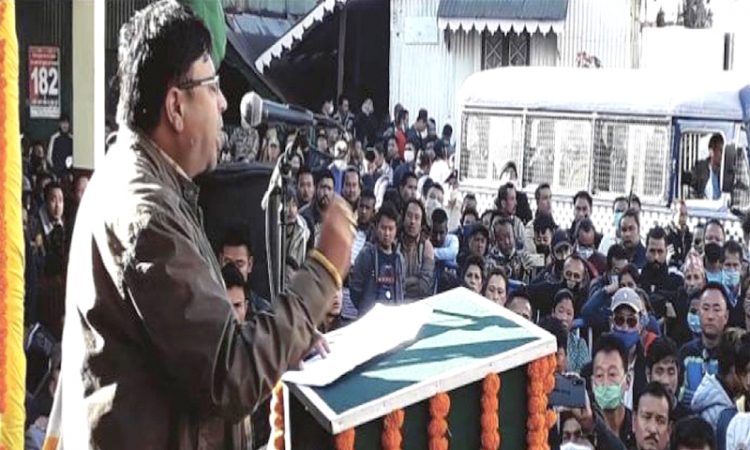 KURSEONG, NOVEMBER 30: The General Secretary of the Gorkha Jan Mukti Morcha (Bimal Gurung faction), Roshan Giri, today said that even the state Government could give the Hills a ‘permanent political solution’ (PPS) that is being talked of. According to him, the BJP, with whom his party had an alliance for years, always sidelined the “prime agenda” and did not grant them anything.
Addressing a huge public meeting in Kurseong in Darjeeling after around 3-and-a-half years, Giri said that they could as well side with the Trinamul Congress when a PPS can be found within the state. He, however, did not say what kind of a PPS that the state could settle for.
“Keeping all this in mind, we took the decision to support Mamata Banerjee,” Giri said. According to him, the state Government has given several cores to the GTA, but that there was rampant corruption at the hands of the “GJMM-2 led by Anit Thapa and Binoy Tamang. “As such, there should be a proper audit on the GTA funds,” he said.
According to him, the BJP leadership had turned their issue from Gorkhaland to the GTA. “Within 24 hours, under the direction of the state BJP leadership, the Central Ministry had changed their letter from “talks on Gorkhaland” to “talks on GTA.”
He was referring to a letter issued by the Central Government some months ago addressed to state Government officials, asking them to attend talks in Delhi on hill issues. While the letter first said it was related to “talks on Gorkhaland,” the Centre issued another letter “correcting” the agenda to “talks on Gorkhaland Territorial Administration.”
Reminded later today that Banerjee was against Gorkhaland, Giri said that she had been opposing Gorkhaland “only under political compulsion.” He, however, also admitted that state Assembly cannot grant a separate state of Gorkhaland, and that statehood can be achieved through a “parliamentary process.”
“Whatever the Chief Minister commits, she always fulfills them, but the BJP-led Central Government has only betrayed us and given false assurances,” he said.
He also said that party president Bimal Gurung has already announced in Kolkata that he wants to see Banerjee as Chief Minister of West Bengal once again. “That is why he will support Mamata Banerjee and her party in the Assembly elections. But in the 2024 MP elections, we will support any party that carries forward and supports our demand for Gorkhaland. Hence, the Hill people should understand that we have not sidelined or dropped our prime demand of Gorkhaland,” Giri said.
Asked by reporters on court cases pending against him, Giri said that all the cases are political cases and they will be solved politically. Giri further said that they will never share the dais with the present “GJMM-2” leadership.
“Will the BJP give Gorkhaland or UT (Union Territory)? The BJP has not even fulfilled the demand for tribal status to 11 Gorkha communities. The BJP turned the Gorkhaland talks to GTA talks. As such, we will not support the BJP,” Giri said.
Meanwhile, Kurseong town saw a huge rally organised from the Tourist Lodge to the Motor Stand, where the public meeting was held today. Supporters of the Gurung faction joined the rally in large numbers from different places in the Hills, mainly from Kurseong region. Apart from Giri, GJMM youth leader Dipen Malay and others also addressed the rally. Speakers in the public meeting lambasted the “GJMM-2” leadership over different issues. (Courtesy: TS)