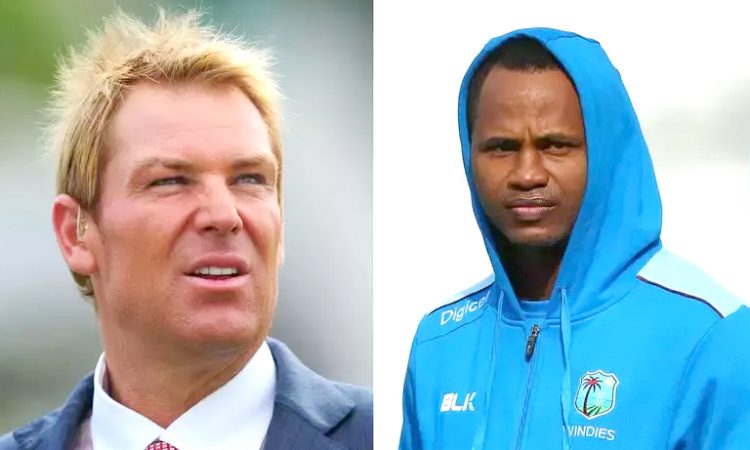 NEW DELHI, October 28: Former Australia spinner Shane Warne on Wednesday slammed Windies all-rounder Marlon Samuels for passing distasteful comments on him and England’s Ben Stokes.
Earlier, Samuels in an Instagram story had abused both Stokes and Warne and the Windies all-rounder had also boasted of his superior skin tone.
Samuels had also involved Stokes’ wife in his comments and this resulted in wide outrage over social media.
Warne has finally responded to Samuels’ comments and has said that the former Windies player has no friends at all.
“I have just been sent what Samuels has posted re @benstokes38 & I. It is a very sad situation as he obviously needs serious help-but has no friends at all and not even his ex-teammates like him. Just because you were an
ordinary cricketer-no need to be an ordinary person. Get help son,” Warne tweeted.
Stokes had recently spoken about the challenges of staying in quarantine and the England and Rajasthan Royals all-rounder had joked that he wouldn’t wish it for even his ‘worst enemy’ Marlon Samuels.
Samuels then went on to take Stokes’ comments way too seriously and the Windies all-rounder mentioned Stokes’ wife in a distasteful manner.
Samuels and Stokes’ rivalry goes way back as in 2015, the former mocked the England all-rounder with a salute.
The pair was once again at loggerheads during the 2016 T20 World Cup final between West Indies and Australia. (ANI)