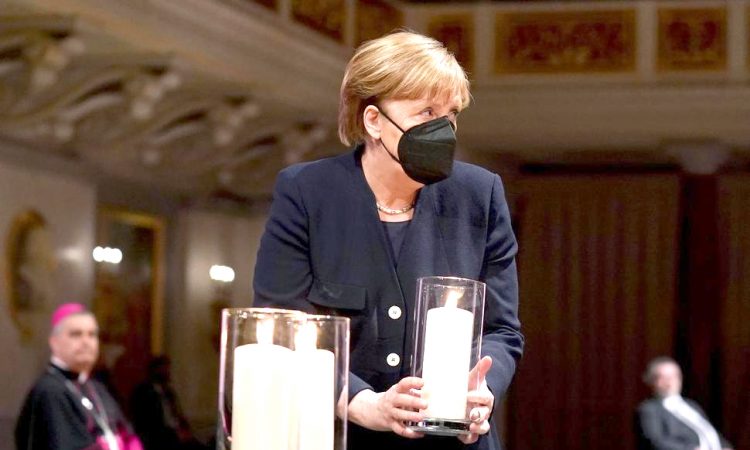 Berlin, April 18: Germany is paying tribute on Sunday to the nearly 80,000 people it has lost to the coronavirus, even as the country struggles to get a grip on another rise in infections.

President Frank-Walter Steinmeier will lead a memorial event with other top officials at Berlin’s Konzerthaus concert hall. His office says it is also dedicated to the bereaved who could not accompany their relatives when they died and for whom important and comforting rituals of mourning were not possible.
Germany’s confirmed death toll from COVID-19 stood at 79,914 on Sunday, an increase of 67 over the previous day. That is the fifth-highest total in Europe, after the UK, Italy, Russia and France.
Germany had a comparatively small number of deaths in the pandemic’s first phase, but saw much higher infection levels in the fall and winter. In January, more than 1,000 deaths per day were reported at times in the country of 83 million people.
Infections have increased again over the past two months as a more contagious coronavirus variant first detected in Britain took hold. Germany has reported 3.14 million cases since the pandemic began.
Chancellor Angela Merkel is trying to get a bill through parliament that would mandate an emergency brake in areas where there are more than 100 weekly new cases per 100,000 inhabitants. The nationwide rate stood at 162 on Sunday.
It would require the closure of stores, cultural and sports facilities, limits on personal contacts and nighttime curfews. The idea is to end the patchwork of measures that has characterized the pandemic response across Germany’s 16 states.
Merkel says the plan is needed to prevent the health care system from becoming overwhelmed, but state governments and others have found fault with aspects of it. (AP)