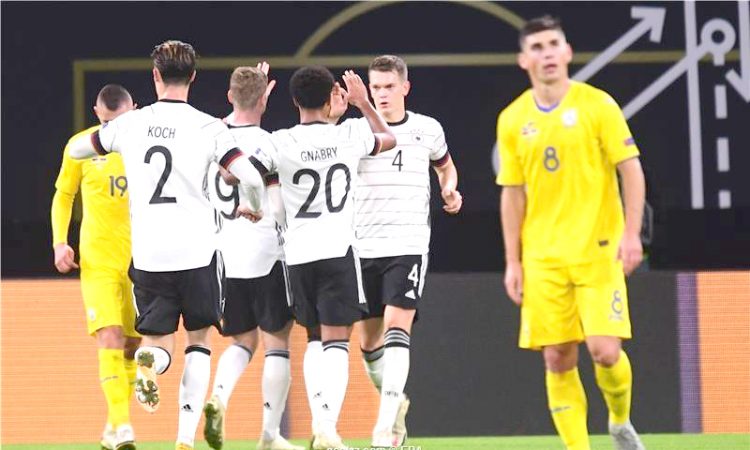 LEIPZIG, November 15: Timo Werner scored either side of the break to steer Germany from behind to a 3-1 victory over Ukraine in their Nations League match on Saturday to top their group with a game left to play.
The Chelsea striker scored twice after Leroy Sane had cancelled out a surprise 12th minute lead by the visitors.
The Germans, in the midst of an overhaul following their 2018 World Cup first round exit, are now top of Group A4 on nine points, one ahead of Spain whom they face on Tuesday. The top team qualifies for the final stage of the competition.
Ukraine, who had four players, including top striker Andriy Yarmolenko, ruled out after testing positive for COVID-19 on the eve of the game, are third on six points.
Spain grab draw with Switzerland after record-man Ramos misses two penalties
Spain forward Gerard Moreno came off the bench to snatch a 1-1 draw away to Switzerland in the Nations League on Saturday after Sergio Ramos had missed two penalties.
Ramos, who also became the most capped European player of all time, had scored all of his previous 25 penalties but was thwarted when Yann Sommer guessed the right way and repelled his spot kick in the 58th minute to preserve his side’s lead.
Switzerland had taken the lead in the 23rd minute through Remo Frueler and could have doubled their advantage in the second half but Ramos came to his side’s rescue with a goalline clearance.
Spain then earned a second penalty in the 79th which led to Swiss defender Nico Elvedi being sent off. However, Ramos was again outwitted by Sommer, who could not be fooled by the defender’s chipped ‘Panenka’ penalty and caught the ball.
Substitute Moreno saved Ramos’ blushes in the 89th minute, finally beating Sommer by lashing home a cross from Sergio Reguilon.
Germany lead Group A4 with nine points, while Spain are second with eight and must win Tuesday’s showdown at home to Joachim Loew’s side in order to progress to the final four. Switzerland, meanwhile, were relegated to League B.
Sweden beat Croatia 2-1 to stave off Nations League relegation
Goals from Dejan Kulusevski and Marcus Danielsson snapped Sweden’s four-game losing streak in the Nations League as they beat Croatia 2-1 in Stockholm on Saturday.
Needing a win to avoid relegation from Group A3, the victory keeps Sweden’s survival hopes alive as they head into their final group game against France in Paris on Wednesday, despite still being bottom of the group.
Sweden boss Janne Andersson had to watch the game from home following a positive test for COVID-19 and 20-year-old forward Kulusevksi was chosen to start up front with Marcus Berg.
The decision paid off quickly as the Juventus player had a stinging shot saved and created another chance for winger Emil Forsberg. He gave his side the lead when he held off Mateo Kovacic to side-foot home his first goal for his country in the 36th minute.
Danielsson made it two in first-half stoppage time, swooping in at the near post to send Sebastian Larsson’s corner flying into the net with a glancing header to cap Sweden’s best 45 minutes of the competition so far.
They continued to dominate in the second half but Croatia muscled their way back into the game and pulled a goal back when an Ivan Perisic header deflected off Danielsson and into the net.
The tall defender almost made amends late on with another towering header from another set piece, but keeper Dominik Livakovic was able to keep his shot out.
The win leaves Sweden bottom of the group on three points, with the Croatians third on goal difference. (Reuters)