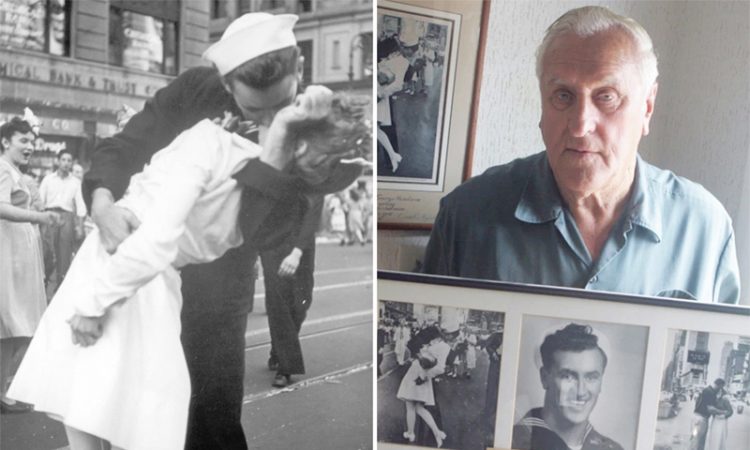 The picture of George Mendonsa bending over and kissing 21-year-old Greta Zimmer Friedman on VJ Day (Victory over Japan) became one of the most enduring images of the period.
It was one of four photographs taken by Alfred Eisenstadt as a round-up of celebration pictures for Life magazine.
Ms Friedman died in 2016 aged 92.
Mr Mendonsa’s daughter, Sharon Molleur, said her father suffered a seizure and died on Sunday after a fall at a care home in Middletown, Rhode Island.
Alfred Eisenstadt did not give the names of the kissing strangers and it was years before Mr Mendonsa and Ms Friedman were confirmed as the featured couple.
The photographer described how he watched the sailor running along the street on 14 August 1945, grabbing any girl in sight.
“I was running ahead of him with my Leica looking back over my shoulder but none of the pictures that were possible pleased me,” he wrote in the book Eisenstadt on Eisenstadt.
“Then suddenly, in a flash, I saw something white being grabbed. I turned around and clicked the moment the sailor kissed the nurse. If she had been dressed in a dark dress I would never have taken the picture.”
Ms Friedman, who had been working as a dental assistant, said she had not been aware of the photo until the 1960s.
“It wasn’t much of a kiss,” she later recalled. “It was just somebody celebrating. It wasn’t a romantic event.”
Mr Mendonsa had served in the Pacific and was on home leave when the picture was taken.
However, not everyone sees the photograph as something to celebrate. Although it was widely lauded as an expression of the joy felt across the US on the day Japan surrendered, in more recent times some have considered it, as Time Magazine wrote, “as little more than the documentation of a very public sexual assault”.