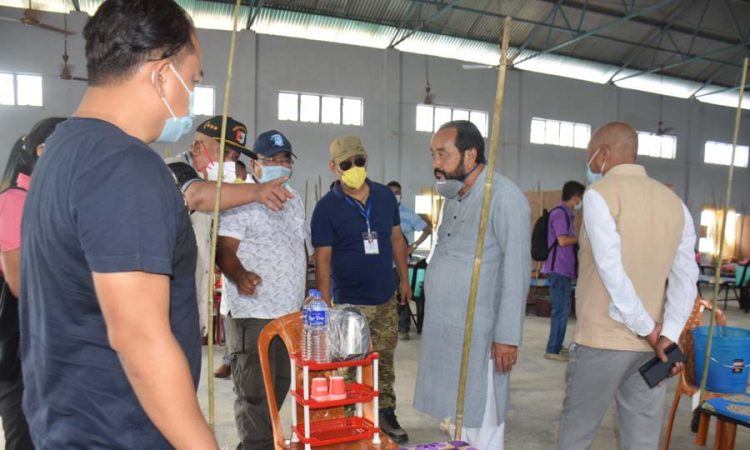 Dimapur, June 4: As the fight against COVID-19 intensifies in Nagaland with the rising number of positive cases of those who are returning to the state, the frontline warriors of the state are on war-footing to combat the pandemic. Our men in khaki, the Nagaland Police, have taken up another responsibility, besides their normal policing duties to keep the people of the state secure.
Yes, the khaki-clad police personnel took up that task of creating accommodation for thousands of people, who are returning to the state from different parts of the country, and within no time converted the otherwise almost defunct Industrial Growth Centre, popularly known as Ganesh Nagar, into an Institutional Quarantine Centre. As the number of returnees registering to return back to the state grew to 1800 within 2 days of the launch of state Government’s website iamstrandednagaland.gov.in, and kept on increasing day by day, the Government faced problems of accommodating them, as those returnees have to be kept in institutional quarantine. And the job to create the accommodation was entrusted to Nagaland Police at the almost defunct Industrial Growth Centre. 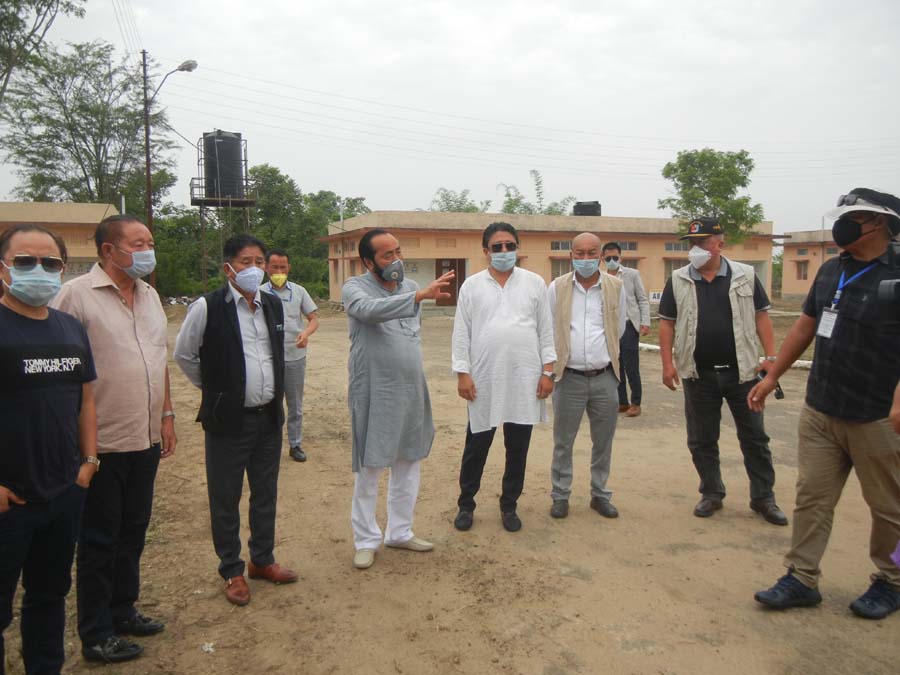 Beginning May 22, the Nagaland Police personnel drawn from various units of the state and under the guidance of senior police officials undertook the task seriously and managed to set up accommodation at the existing infrastructure of Ganesh Nagar, which can house more than 1000 returnees in the days to come. The available facility is ready to accommodate more than 550 returnees, who are arriving Dimapur on Friday (June 5).
Officials present at Ganesh Nagar told Nagaland Page that out of 21 halls at the site, 16 of them have been converted into institutional quarantine centres where little more than a 1000 beds are being arranged for returnees to undergo mandatory quarantine period. Separate toilets and bathrooms have also been constructed at each hall. Separate Isolation Wards, with attached toilets, have also been set up in different buildings where only two persons would be accommodated per building.
As per protocol, Nagaland Police has arranged all basic facilities for all returnees, while it has also been managing the kitchen to provide food for them.
While the entire area has been categorized into different sectors to manage the returnees as per their health conditions, the Nagaland Police has also involved its Medical team consisting of Doctors, Nurses, Pharmacists and Lab technicians, who would be working day and night on rotational basis. 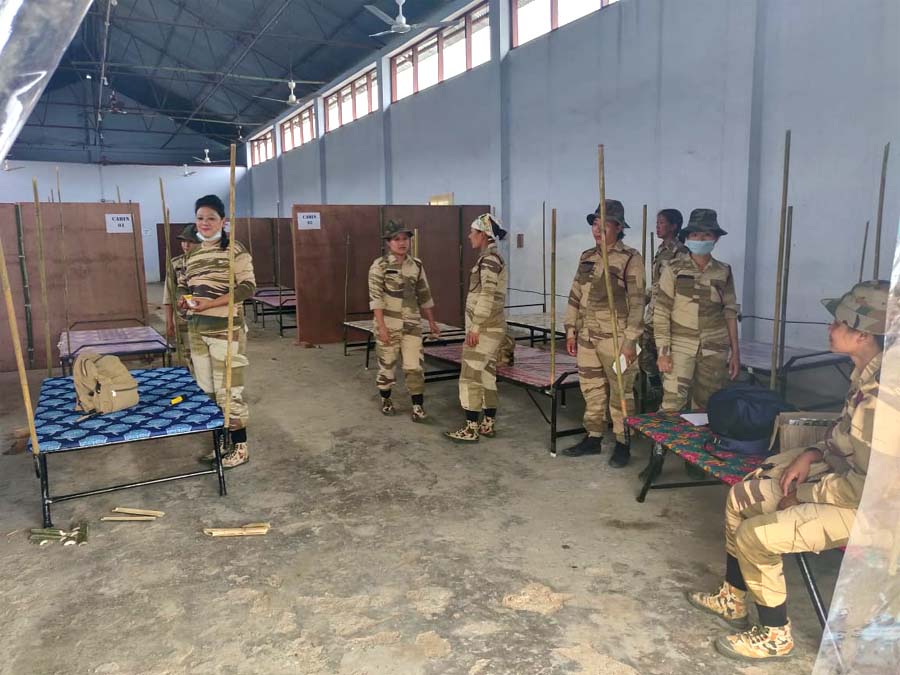 Talking to Nagaland Page, Dr N Adaho, CMO, Police Referral Hospital, said that a team of 11 doctors have been divided into 5 groups with other subordinate staff, who would take turns to provide medical services at the quarantine centres. He said the doctors have been drawn from all units of Nagaland Police, adding that they are well equipped to look after the returnees.
The transformation of Ganesh Nagar into a Quarantine Centre might have taken people by surprise as the facilities originally created for promoting the economy of the state, are now being used to save people’s lives. Interestingly, when Nagaland Police was handed over the task of converting the place into a Quarantine Centre, the area was inaccessible due to years of over-growth of shrubs and jungle, as it was abandoned. However, within 15 days, around 250 police personnel from various units gave such a facelift that it even surprised Nagaland legislators, who had visited the area sometime earlier and even today.
The police team has even constructed a reservoir with a capacity of 1.5 lakh litres of water which would be used by the people in the quarantine facility.
When asked why they had constructed the reservoir, a police officer disclosed that there are problems of availability of water in the entire complex and therefore they dug up the reservoir where water brought in tankers are stored and then supplied through pipes to different quarantine facilities.
DGP Nagaland, John Longkumer disclosed that 250 jawans, most of them from the STF, are working in shifts at Ganesh Nagar. He disclosed that two sectors are ready while the entire place would be ready after 5 days.
He also informed that 550 people are expected to arrive tomorrow.
Deputy Chief Minister, Y Patton, who is also the in-charge of Home, today visited Ganesh Nagar to take stock of the situation as the returnees are bound to arrive by tomorrow. The Deputy Chief Minister was accompanied by PHED Minister, Jacob Zhimomi, MLA, Azheto Zhimomi, Advisor Power, Tovihoto Ayemi and others.
While briefing the gathering, Jacob Zhimomi said that the first time he visited the area, it was a jungle and it was difficult to enter inside but now it has been changed a lot.
He also said once the quarantine facility is occupied by returnees, they would face criticisms out of nothing. However, he thanked the Police Department for the wonderful job.
He also stressed on prevention of the pandemic and said that could be only by isolation of returnees. 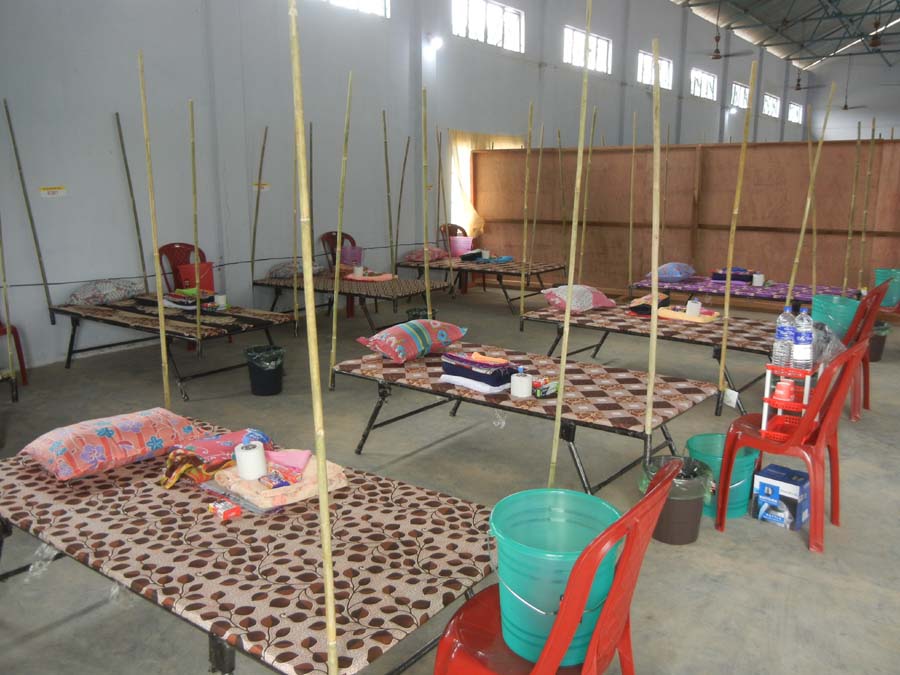 NPF MLA, Azheto Zhimomi, who was happy to see the transformation of Ganesh Nagar into a Quarantine Centre, expressed apprehensions about the people of the nearby village but underscored that they should be sensitized about the situation well in advance about the use of the facility. He said before the returnees are brought to Ganesh Nagar, it has to be ensured that the villagers are informed to stay at home and once the returnees enter the quarantine facilities, the entire area should be disinfected.
Deputy CM, Y Patton lauded the police force, led by DGP John Longkumer, for taking up the responsibility and converting Ganesh Nagar into an Institutional Quarantine Centre within a record time.
He said the facility would be occupied by returnees by tomorrow.
Patton, who inspected the Quarantine and isolation wards and reviewed the preparedness of security, medical, electricity, water supply, sanitation and control room, further said that the Police Department has done a wonderful job and even Dimapur in-charge for Covid-19 has recommended that the Police Department should be rewarded for this. He also told the police officers to announce the arrival of the returnees to the surrounding villages and make them aware in advance.
He also assured to look into any of their requirements and urged the officials to inform the Government about it.
Later talking to media persons, Y Patton said he visited the quarantine centre today as he wanted to take stock of the situation before the arrival of returnees from Bangalore
On behalf of the Government, Patton thanked DGP Nagaland for doing an excellent job of converting the place into a quarantine facility.
On the situation around the area after Ganesh Nagar was converted into a quarantine centre, the Deputy Chief Minister said that it was quite normal. He also expressed gratitude to the people of the area, especially the surrounding villages for accepting the quarantine centre and welcoming the returnees. They should not have any problem with Ganesh Nagar being set up as a quarantine centre, he added.
When asked about how many people could be accommodated in the place, Patton said if there was no social distancing, the area can accommodate at least few thousands, but at present the Department has arranged for more than one thousand. 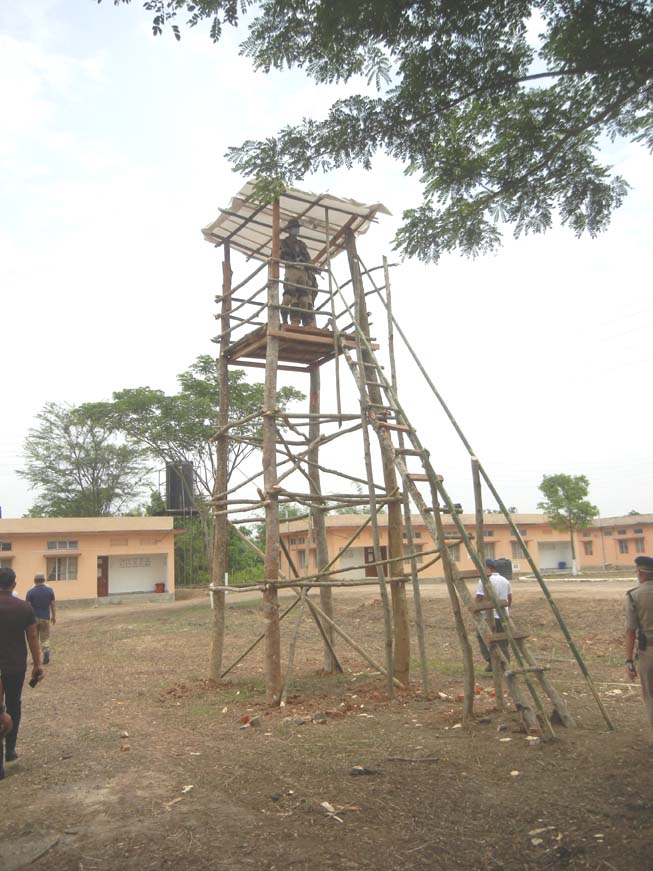 DIG Training, Aotemsu, the key man behind all the development works at Ganeshnagar, said that things have been carried out smoothly without any confusion due to the unlimited authority vested on him by DGP, Nagaland.
Aotemsu informed that 250 jawans, including 30 women from the Mahila Battalion, have worked and is still working 10 hours a day. With regards to the medical sector, he informed that 5 teams comprising of 20 medical staff (3 doctors and 17 medical personnel) in each team will work for 7 days.
He further informed that in each sector there would be a medical observation block, which would be manned 24×7, to address emergencies. The Returnees would also be monitored twice daily, he informed.
Earlier, on the arrival of Deputy Chief Minister and his colleagues, a demonstration of food distribution to the returnees was also held, which showed the preparation of the police jawans. (Page News Service)