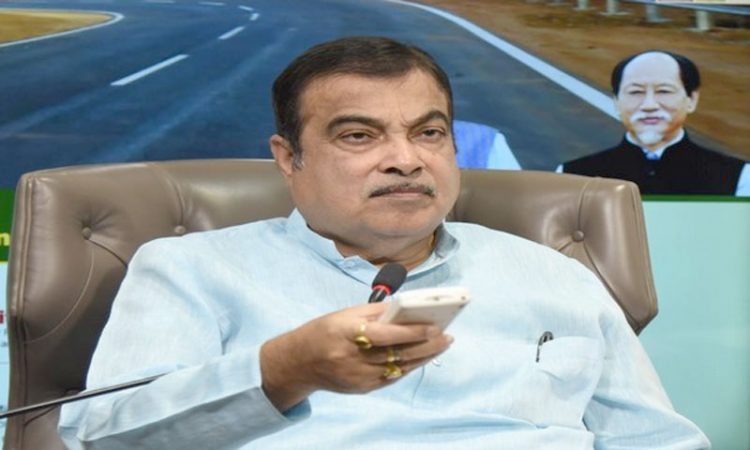 Chief Minister Neiphiu Rio, MoS-RTH Gen (Dr) VK Singh, MPs, MLAs, senior officers from Centre and the State were present on the occasion.
These NH Projects have a length of about 266 KM involving cost of about Rs 4127 crore.
Speaking on the occasion, Gadkari stated that Union Government is committed to the development of Northeast and Nagaland and informed that 667 km were added to the NH network in Nagaland during last 6 years, which depicts a growth of nearly 76%.
The NH network in the State today has been extended to 1,547 km up from 880.68 km till 2014.
The Minister said that almost all districts in Nagaland now have been connected except few, to a robust network of National Highways. He said the NH network density now is 93.30 km/1000 sq km against National average of 39.90 km/1000 sq km.
The population wise density of NH network in the State is 77.73km/Lakh population against national average of 10.80 km/Lakh population.
Gadkari further informed that for development and improvement of National Highways, 55 numbers of works of total length 1063.41 km and total cost of Rs. 11,711 Cr have been approved in the last 6 years. This includes
about 48 km of 3 projects concrete roads as part of improvement of Dimapur City (largest city of Nagaland) project at a total cost of about Rs. 1,598 crore.
He said 16 numbers of work of length 690 Km amounting Rs 7,955 crore are in progress. Another 7 works of 105 Km amounting to Rs 966.75 Crore are in tendering stage. He also indicated that 11 works of 178 km length costing Rs. 2,127 crore are to be approved during 2020-21 with enhanced sanction ceiling. Five works of 524 km costing over Rs.6,000 cr are in DPR stage.
The Union Minister added that under CRF, the total sanction till now from 2002 is Rs 1,334.3 cr, of which Rs. 487.14 cr have been released. He announced that a sum of Rs 45 cr is being released for Nagaland soon. He also pointed out that the State’s BoS ratio is 11.5% today, which is very high.
Gadkari requested the Chief Minister to urgently send the estimates for Land and Damage Compensation in respect of Kohima By-pass. He also informed that NHIDCL has taken up 2-laning of Kohima-Mao road in Nagaland, and the civil work has already been awarded on September 30, 2020. The Appointed Date has been declared as October 20, 2020 and the contractor has mobilised on Site.
Stating that the estimate for damage compensation is awaited, he added that the same may be expedited by the State Government so that the Civil Work can be started at the earliest.
Chief Minister Nephiu Rio requested the Union Minister to consider development of foothill roads in the State. Gadkari informed that the same is under consideration.
The Chief Minister also raised the issue of Dimapur-Kohima road called as the lifeline of Nagaland.
Gadkari responded that work is in progress, and 70-80%t work on this road has been completed. NHIDCL has undertaken rigorous efforts to bring the projects on track and expedite the progress of work. Regular meetings at the highest level have been taken to expedite the progress of work on ground.
Gadkari also urged Rio to further review the NH works to resolve the issue.

Speaking about the 26.25 km Kohima-Mao Road for which foundation was laid today, Gadkari informed that this stretch is also important part of Asian Highway (AH-1) connecting to Myanmar as it will greatly improve connectivity of Kohima city to Manipur border. It also has importance in socio-economic progress of Nagaland. The better roads will help improve in growth of industry, trade and marketing of local products from various resources like bamboo etc, he added.
MoS-RTH Gen (Dr) VK Singh said Nagaland is a beautiful place, and hoped that the new NH projects will attract improved tourist traffic to the State. He informed that of the 14 projects, for which foundation was laid today, 11 will be executed by NHIDCL and 3 by State PWD through the Road Wing of MoRTH.
(Page News Service)