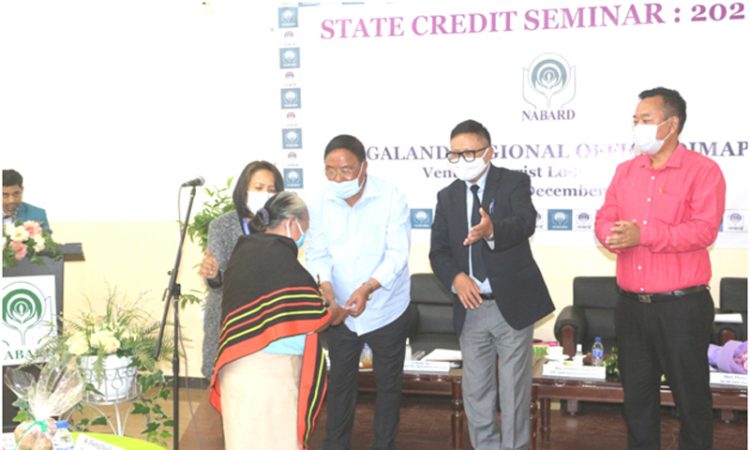 DIMAPUR, DECEMBER 8: Minister for Agriculture & Cooperation G Kaito Aye on Tuesday said that things in Nagaland have not remained the same as yesterday and situations are getting better with the approach of a permanent solution and called upon all banks to enhance ground level credit flow in Nagaland.

Speaking during the ‘State Credit Seminar 2020-21’ organized by NABARD Nagaland Regional Office here at Hotel Acacia, Dimapur, the Minister said that despite being intellectuals Nagas lack the habit of approaching banks and financial agencies hence asked them to come forward and create awareness among the people.
Aye said in his speech that some of the major observations that bothers him are low penetration of bank branches, as, 29 RD blocks out of 74 remain unbanked and Credit-Deposit (CD) ratio in the state stands at 41.60% as on March 31, 2020 which needs to be improved to minimum 60%, adding that the Ground Level Credit Flow (GLC) flow stands at 41.78% of the target set which is a matter of worry.
He said that the nationwide lockdown due to the pandemic presented the State with both challenges and opportunities, leading to the realization of the vulnerability of the State in terms of production of essential items, dependency on imports of the prevalent trade practices and trends, of panic purchases and negligible presence of local entrepreneurs.
“The state’s vulnerability in terms of self-sufficiency in food production sector highlighted the need to focus and strive towards the concept of self-sufficient villages or ‘smart villages’ where activities of agriculture and allied sectors have to be intensified and the mode of implementation re-oriented,” he underscored.
On the occasion, Aye also launched the “State Focus Paper for 2021-22” and spelt out the State Government plans for support to farmers.
Y Kikheto Sema (IAS) APC and Commissioner & Secretary, in his address, mentioned the traditional method of burn and splash farming is not going to be a viable or an economical option in the state anymore and added that while all these times different things were being tried out, it is now time to do things differently and agri-allied sectors must come together in each district.
He emphasized the role of banks for successful implementation of Agriculture Infrastructure Fund Scheme and exhorted banks to implement the scheme as per bank-wise target allocated.
Thony Pau, AGM, SBI, Dimapur, while talking about the scope and challenges of priority sector lending in Nagaland, highlighted that in the absence of SARFAESI Act in the State, lenders face great hindrances and termed the Act a must.
Commenting on the need to encourage people to make timely repayments of loans so as to not discourage the lenders, he also mentioned the issue of misusing funds under different schemes explaining that when politicians and underground groups get involved in selection of beneficiaries, the deserving people are not benefitted and funds face diversions.