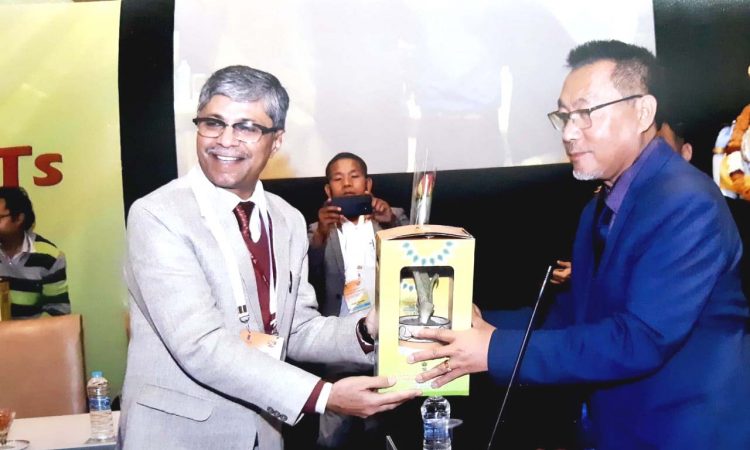 Dimapur, February 6: Minister for Health and Family Welfare, S. Pangnyu Phom today stated that the AYUSH Society is playing an important role and contributing immensely in health care system across the country and particularly in Nagaland.
Addressing the 4th AYUSH Minister’s conference at Ashoka Hotel in Delhi today, the Minister said the Government is fully committed and sincerely working to promote AYUSH in the State. “At the same time, the Government of Nagaland is also fully committed to promote AYUSH system in the State and as a result of our commitment, we have 6 regular doctors, creation of another 8 regular medical officer post is under process for cabinet clearance,” he said.
Pangnyu mentioned that 82 AYUSH doctors has been appointed on contractual basis under National Health Mission (NHM) and National AYUSH Mission (NAM) and are posted to District hospitals, community health centres and primary health centres across the State.
Keeping in mind the commitment of the Government, the AYUSH Society under the Department of Health & Family Welfare have organized Arogya Mela three times in the State, with Mokokchung District being the recent one, he said. “We have also conducted various activities as per the state annual action plan like Public Health Outreach, AYUSH Gram, school health programme, training programme for ASHAs and ANMs, cultivation of medicinal plant, etc.”
Citing some achievements after the introduction of National AYUSH Mission (NAM), Pangnyu said 10 bedded integrated AYUSH Hospital at Dimapur is functioning with full manpower. Another 30 bedded integrated AYUSH Hospital at Noklak under Tuensang District bordering to Myanmar has already been inaugurated last December and is rendering services at remotest area of the State.
The Minister also expressed optimism that the construction of 50 bedded integrated AYUSH hospital at Razha, Chedema under Kohima District will be completed within a month or two and inaugurated by the year end. Another 50 bedded AYUSH hospital at Sapangya (Chuntia) under Mokokchung District is under process, he said.
Pangnyu informed that Nagasland is the only State that has no pending Utilization Certificate (UC) as indicated in the Agenda note 8 of the conference and assured to continuously strive to implement all programmes as per the guidelines of the Ministry in future.
Acknowledging that most of the States will be facing difficulty while implementing various activities under National AYUSH Mission like Nagaland, Pangnyu mentioned that the State does not have a separate AYUSH Directorate for which the Mission is facing numerous hurdles in implementation. He appealed to the Ministry of AYUSH to grant a separate AYUSH Directorate to Nagaland State out of the resource pool allotted to Nagaland. (Page News Service)