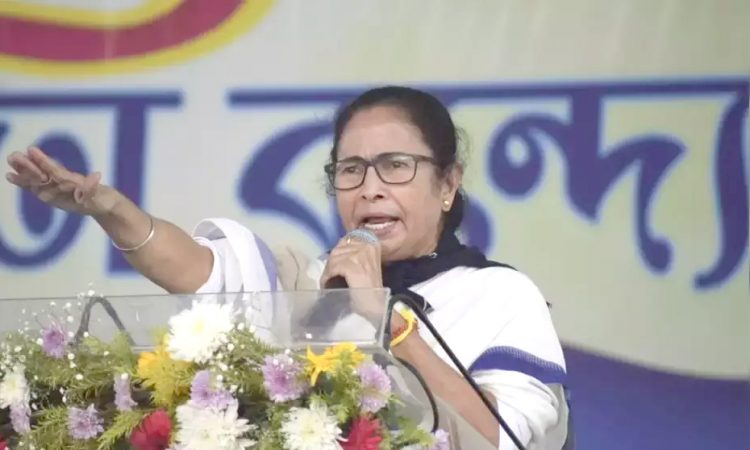 Mejia/Chhatna (WB), March 16: West Bengal Chief Minister Mamata Banerjee on Tuesday accused Union Home Minister Amit Shah of “hatching a conspiracy” to harass TMC leaders ahead of the elections, and sought to know if the Election Commission is taking instructions from him.

Contending that Shah is “frustrated” over poor turnout at his rallies, Banerjee, while addressing a public meeting here in Bankura district, accused the BJP of plotting to kill her, and claimed that her director of security, Vivek Sahay, was removed from the post by the poll panel, following her injury in Nandigram last week, for this reason.
Referring to the alleged attack on her in Nandigram, where she has crossed swords with her protege-turned-adversary Suvendu Adhikari, Banerjee said no injury can stop her from ensuring her party’s victory in the assembly polls.
“Amit Shah is frustrated as his rallies have registered poor turnout. Instead of running the country, he is sitting in Kolkata and hatching conspiracies to harass TMC leaders. What do they want? Do they want to kill me? Do they think they will win elections by killing me? If they think so, they are wrong,” she said.
Urging the EC to take note of Shah’s “antics”, Banerjee wondered whether the EC has been reduced to a political tool of the saffron party.
“Is Amit Shah running the EC? (It seems) he is giving instructions to the EC. What happened to their independence? My director security (Vivek Sahay) was removed (by EC) under his instructions,” she said.
Banerjee claimed Shah, who held a series of meetings with the state leadership on Monday night, has understood well that his party is miles away from the seat of power.
“Will the home minister run the country or spend time in harassing senior government officials, politicians? Will he harass the home secretary? Send CBI notice?
“They are booking all hotels. They are planning to frame cases against TMC candidates, send CBI, ED teams to political Rivals? They are sending notices to those behind Nandigram land movement. Bankura and Bengal should show the way to defeat these dictators,” she said.
Demanding free LPG gas for every citizen, she said, the BJP is “selling off” railways, Coal India, closing down BSNL and banks and “people should unite against this move.”
“They have renamed a stadium after Prime Minister Narendra Modi. If they get to have their way they will change the name of the country,” she said.
At another meeting in Chhatna, the CM said, “Bengal will soon vote to decide who will be at the helm.”
Continuing her tirade against Shah, she said, “There is a home minister who garlands a statue mistaking it as that of Birsa Munda’s. The bust of Vidyasagar statue was vandalised in his presence.
“He is professing his love for tribals and backward communities by bringing food from five-star hotels and savouring the items at their households, just for the cameras,” she said.
The feisty TMC boss said she and other party leaders had hit the streets in the interest of people amid the Covid- 19 pandemic, while BJP leaders chose to stay at home.

Talking about the measures taken by her dispensation to fight the pandemic, the CM said, “I had written to Prime Minister Narendra Modi to arrange free vaccination for everyone in Bengal. I had said that we are ready to bear the cost. But he did not respond.” (PTI)