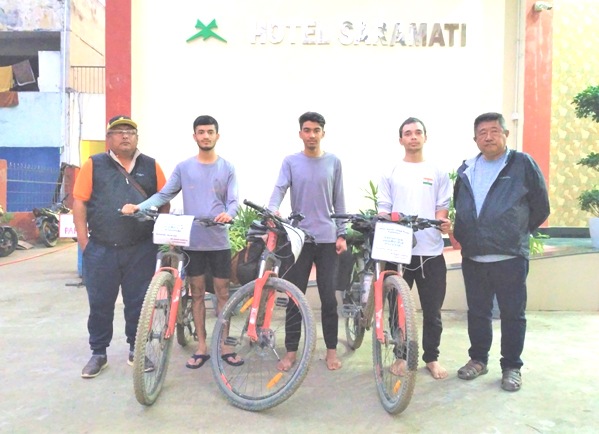 Dimapur, February 10: Three friends, Sagar Dewrari (21), Pankaj Bisht (21), and Rishabh Joshi (21), who are on an expedition to set a cycling record in India and Asia as well as to create awareness about cleanliness and fitness, on Monday reached Dimapur. Members of the club ‘Run2Live YUVA’ which is also sponsoring the expedition, and RS Group, the trio is attempting to cover 15,000 kms on their bicycles, reaching every state and union territory of the country to create the record. Till now, they have covered 23 states, including Nagaland, and the states that are yet to be covered include Arunachal Pradesh, Sikkim, Bihar, and Jharkhand.
Hailing from Uttarakhand, they started their journey on November 6, 2019, and are expecting to complete the expedition mid March. Of the 15,000 kms target, they have covered more than 10,000 kms, travelling on an average of 120 kms per day.
Talking to the media fraternity here at Hotel Saramati, where they are being hosted by Nagaland Adventure & Motor Sports Association (NAMSA), Sagar said that they would leave for Itanagar on Tuesday via Golaghat and once the expedition is over, they will take part in professional cycling contests, and they have the future plan of travelling the world.
He also revealed that this isn’t the first time they are being a part of such an initiative, as prior to that, in 2017, they ran for 315 kms and in 2018, they were also part of a cycling expedition from Nainital to Ladakh and back covering 2,500 kms.
Besides being sponsored by Run2live they are also being assisted by bike station Haldwani, Firefox, local business men and schools. They are carrying with them tents, sleeping bags, clothes, and tools. They are also documenting their journey on various social media platforms under the name of RS group.
(Page News Service)

PDA Govt to bring out booklet on its achievements