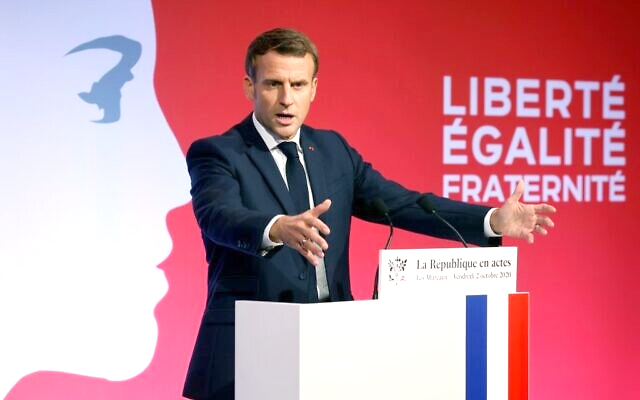 Paris, October 3: President Emmanuel Macron unveiled a plan Friday to defend France’s secular values against Islamist radicalism, describing Islam as a religion “in crisis” all over the world.
In a long-awaited address, Macron insisted “no concessions” would be made in a new drive to push religion out of education and the public sector in France.
“Islam is a religion that is in crisis all over the world today, we are not just seeing this in our country,” he said.
He announced that the government would present a bill in December to strengthen a 1905 law that officially separated church and state in France.
The measures, Macron said, were aimed at addressing a problem of growing Islamic radicalisation in France and improving “our ability to live together”.
“Secularism is the cement of a united France,” he insisted, but added that there was no sense in stigmatising all Muslim believers.
The law permits people to belong to any faith of their choosing, Macron said, but outward displays of religious affiliation can under no circumstances be allowed in schools or the public service.
He announced that France would seek to “liberate” Islam in France from foreign influences by improving oversight of the financing of mosques.
There would also be closer scrutiny of schools and associations exclusively serving religious communities.
France has in recent years been forced to take a hard look at its core republican values, perceived by many to be threatened by Islam in the wake of a string of terror attacks since 2015 targeting secular liberties such as freedom of expression.
Macron was speaking one week after a man wounded two people in a meat cleaver attack outside the former Paris offices of the Charlie Hebdo satirical weekly which was condemned by the government as an act of “Islamist terrorism”.
Staff at Charlie Hebdo were massacred in January 2015 by Islamist gunmen seeking to avenge its publication of caricatures of the Prophet Mohammed.
In January, a renewed debate about freedom of expression erupted when a teenager received death threats for attacking Islam in an expletive-laden Instagram rant.
And earlier this month, divisions were highlighted when MPs walked out when a university student entered parliament in a headscarf. (AFP)