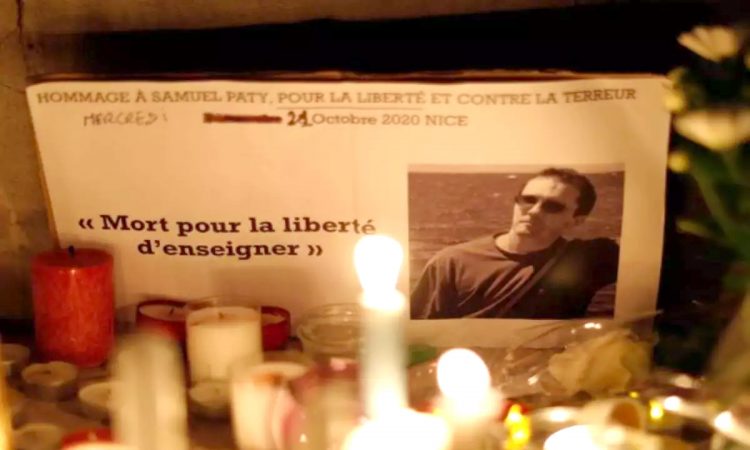 A makeshift memorial as people gather to pay homage to Samuel Paty, the French teacher, who was beheaded on the streets of the Paris suburb of Conflans-Sainte-Honorine.

PARIS, October 23: The investigation into the murder of a French teacher for showing cartoons of the Prophet Mohammed in class turned to Syria on Thursday, where the killer had a jihadist contact, a source close to the case said.
Seven people have been charged with being complicit in a “terrorist murder” after 18-year-old Chechen Abdullakh Anzorov beheaded Samuel Paty on the outskirts of Paris on Friday, including two teenagers who helped him identify the teacher.
France paid homage to Paty on Wednesday, with President Emmanuel Macron saying that the history and geography teacher had been slain by “cowards” for representing the secular, democratic values of the French Republic. (AFP)
“Islamists want to take our future,” Macron said. “They will never have it.”
In their search for accomplices, anti-terror investigators have now established that Anzorov had contact with a Russian-speaking jihadist in Syria whose identity is not yet known, the source told AFP.
Le Parisien newspaper reported on Thursday that Anzorov’s suspected contact had been located through an IP address traced back to Idlib, a jihadist holdout in northwestern Syria.
In an audio message in Russian immediately after the killing, translated by AFP, Anzorov said that he had “avenged the Prophet” whom the teacher had shown “in an insulting way”.
In the recording, which contains several references to the Koran as well as to the Islamic State group, he also said: “Brothers, pray that Allah accepts me as a martyr”.
The message was published on social media in a video, accompanied by two tweets, one showing the victim’s severed head and another in which Anzorov confessed to the murder.
Moments later he was shot dead by police.
Many of Paty’s students saw the images online before they could be taken down.
The teenagers who pointed out Paty to his killer in return for 300-350 euros ($356-$414) were charged late Wednesday over the killing.
The parent of one of Paty’s students, who started the social media campaign against the teacher even though his daughter was not in class when the cartoons were shown, was also charged.
Also charged was a known Islamist radical who helped the father stir up outrage against Paty.
The other three facing prosecution are friends of Anzorov, one of who allegedly drove him to the scene of the crime while another accompanied him to purchase a weapon.
Two of them also face charges of being complicit in terrorist murder while the third was charged with a lesser offence, the anti-terrorist prosecutor’s office said.
Paty, 47, became the target of an online hate campaign over his choice of lesson material — the same images which unleashed a bloody assault by Islamist gunmen on the Paris offices of satirical magazine Charlie Hebdo in January 2015.
Police have carried out dozens of raids since the crime, while the government has ordered the six-month closure of a mosque outside Paris and dissolved the Sheikh Yassin Collective, a group they said supported Hamas.
The French government has also earmarked for dissolution more than 50 other organisations it accuses of having links to radical Islam.
Paty’s beheading was the second knife attack in the name of avenging the Prophet Mohammed since a trial of alleged accomplices in the Charlie Hebdo attack started last month.
The killing has prompted an outpouring of emotion in France, with tens of thousands taking part in rallies countrywide in defence of free speech and the right to mock religion.
“We will not give up cartoons,” Macron vowed at Wednesday’s ceremony at the Sorbonne university in Paris.
An opinion poll by the Ifop institute on Thursday found that nearly 80% of those questioned said it was appropriate for teachers to use cartoons making fun of religion in the classroom.
UNESCO director-general Audrey Azoulay on Thursday said that “a teacher has been murdered for his teachings”.
Azoulay told a virtual education summit that she wanted to “pay tribute to this teacher, and all the other teachers in the world who take risks educating our children and young people”. (AFP)