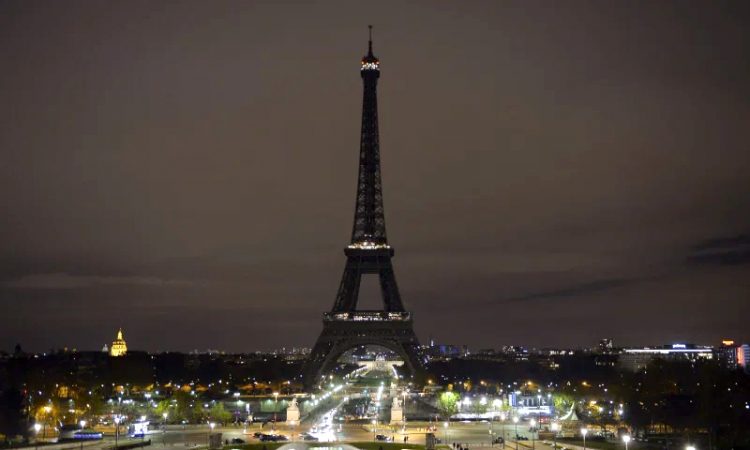 The Eiffel Tower with its lights turned off following the deadly attacks in Paris on Nov. 14, 2015.

PARIS, November 11: Five years after a squad of jihadist killers carried out France’s deadliest peacetime atrocity, the country is again on its highest security alert following a spate of attacks blamed on Islamist radicals.
The night of carnage on November 13, 2015 saw 130 people killed and 350 wounded when Islamist suicide bombers and gunmen attacked the Stade de France stadium, bars and restaurants in central Paris and the Bataclan concert hall.
The sheer horror of the attacks, which were claimed by extremists from the Islamic State (IS) group, left scars that have still not healed. Modern France’s attitude towards Islam remains an issue of burning controversy.
And the security threat to France has not diminished, security sources say, even if the nature of the risk has changed with attackers more likely to be lone extremists inspired by a deadly ideology than part of an organised group.
The fifth anniversary of the November 2015 strikes will come with France still reeling from three attacks in the last weeks: a knife attack outside the former offices of the Charlie Hebdoweekly, the beheading of a teacher and a deadly stabbing spree at a Nice church.
“You might think that the threat has faded into the background as other problems emerged,” a French security source, who asked not to be named, told AFP.
“But in reality, the figures show that it has remained high since 2015.”
In the last five years, 20 attacks have been carried out on French soil, 19 plots failed and 61 were foiled.
There has been an increasing trend of attacks being carried out by isolated individuals, previously unknown to the intelligence services, who are inspired by jihadist propaganda and carry out attacks with cold weapons needing little preparation.
But the threat of an attack planned from outside France — as was the case on November 13, 2015 — remains serious.
“Just because IS has suffered a military defeat does not mean its military capacities have been annihilated,” said a French official involved in the fight against terror, who asked not to be named.
Between 100 and 200 French jihadists are still believed to be in former IS strongholds in northern Iraq and Syria, and it would be an “illusion” to think they were not capable of clandestinely coming back to France, added the official.
In January 2015, Islamist gunmen massacred staff at the Charlie Hebdo satirical weekly, claiming they were avenging its publication of cartoons of the prophet Mohammed.
True to its defiant reputation, the magazine republished the cartoons to mark the start in September of the trial of suspected accomplices in the killings.
In the wake of that move, a Pakistan-born man wounded two people with a meat cleaver on September 25 outside Charlie Hebdo’s former offices.
Teacher Samuel Paty, who had shown his class the cartoons, was beheaded outside his school on October 16 by an Islamist radical from Chechnya. And on October 29 a man recently arrived from Tunisia killed three people with a knife in a Nice church.
The attacks reopened painful debates in France about the integration of Muslim minorites and also prompted tougher rhetoric from
President Emmanuel Macron against radical Islam.
The security source said the risks were higher in the context of the current Charlie Hebdo trial and another trial over the Paris attacks, which is due to open early next year.
These hearings keep up “a kind of background noise” with the risk of “actions of support to those” who are on trial, said the security source.
The 2021 trial into the Paris attacks will see just one of the suspecter perpetrators in the dock — French-Belgian Salah Abdeslam.
Nineteen other suspects accused of providing various logistical support will be on trial with him, though five are presumed dead in Iraq or Syria will be tried in absentia.
The suspected coordinator of the attacks — Belgian Abdelhamid Abaaoud who shot indiscriminately at packed cafe terraces that night — was killed five days later in a police assault on the Paris suburb of Saint Denis. (AFP)