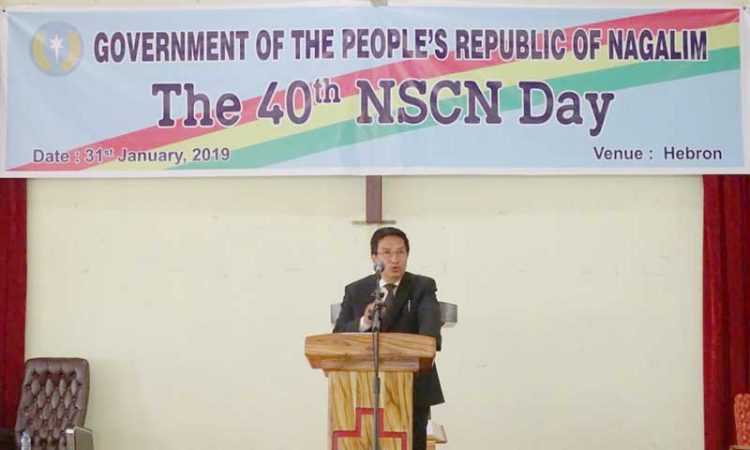 Kohima, January 31: The National Socialist Council of Nagalim (NSCN) today said the Framework Agreement speaks about “sovereignty, identity and territories”.
Speaking at the 40th anniversary of formation of NSCN, Steering Committee convener, Rh. Raising said Framework Agreement signed on August 3, 2015 between the Government of India and the NSCN speaks of Naga sovereignty, identity and territories based on unique history and situation of the Nagas.
“Among others it speaks about the Naga sovereignty, identity and territories. However, Nagas and Indians will peacefully and harmoniously co-exist as two entities sharing sovereign powers,” he said.
“The Framework Agreement is the foundation for final settlement,” he added.
Raising said Naga people have come to know the deception of “high sounding promises” of the aggressor states and that Nagas have realized that they are not safe in the so-called 16 Point Agreement, the Shillong Accord or in any other so-called states under Indian Constitution. “Therefore they continue their resistance movement in defense of their future. Every member of NSCN was a fighting force in the time of war. We NSCN fought the enemies in the military front, we did our best in mobilizing the world on Naga issue in the international arena, our administration embraces all Nagas and their territories,” he said.
But the NSCN leader said confrontational cannot go on without giving chance to negotiation, adding Nagas must have dialogue with the Government of India. He said Naga people need agreements with the Government of India and Myanmar that would recognize their unique history, sovereignty and land, identity, culture and their state. “After having series of political talks with the Government of India the two parties have finally signed the historic Framework Agreement on 3rd of August 2015, on the basis of unique history and situation of the Nagas.”
Raising said NSCN cannot think of a developed Nagalim without a sovereign state, adding sovereign state is a giant machine that can make and unmake things except man. “Indeed the Nagas need a sovereign state and that is where NSCN stands today,” he said.
He said NSCN is for a democratic social set-up and that it has been practicing the culture of collective decision making since its inception. “All social problems are solved through discussion and consent. Nagas are bound together by the cords of the socio-political and economic spirits. NSCN upholds the spirit and culture of the community oriented society and it will do so on all times to come,” the NSCN leader said.
“It is imperative for every member of NSCN to understand the political concept that inspires and guides the Nagas in their national resistance movement and how it has brought them this far. Our political concept begins from our unique history. Our history is unique because the Nags have a sovereign independent people from the very beginning of world history. Our history is unique as we have neither been a part of Union of India nor that of Myanmar, either by conquest of the two powers or by consent of the Nagas,” Raising said.
He said NSCN was formed on the foundation of principles of Naga nationalism and the objectives and manifesto of the NSCN is to safeguard and maintain the fundamental principles of sovereign independent Christian socialist democratic republic of Nagalim founded on the ground of their centuries old social system and modern socio-political scenario.
“Sovereignty is not something to be borrowed from or granted by others, but it is an inherent right of every people. We should be aware of the fact that sovereignty has the power to make and unmake things. The Naga people are also a sovereign people by right. The Nagas must be able to exercise their sovereign rights independent of other, so that they may grow into the fullest human size and develop materially in all fields, physical, mental and spiritual developments of free individuals or people are chiefly driven by the dynamic spirit of right to self-determination, not dependent on others,” he added.
Today’s programme was held at Council Headquarters, Hebron. A short programme was also held in New Delhi by senior NSCN functionaries.
It was on January 31, 1980, NSCN was formed by Isak Chishi Swu, Thiungaleng Muivah and S S Khaplang. The group was formed in protest against Shillong Accord of 1975, which accepted the Indian Constitution. (Page News Service)