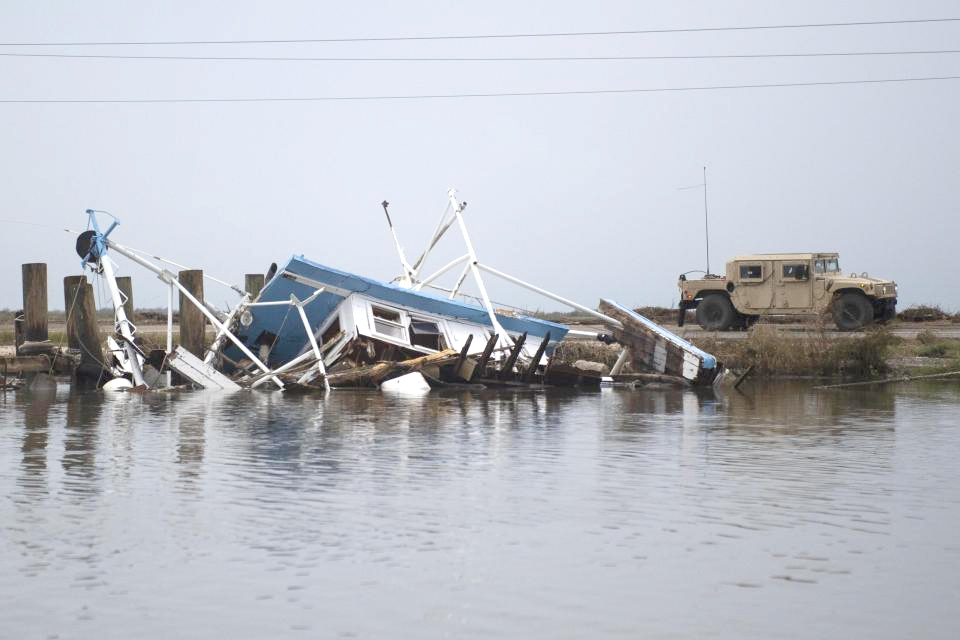 A truck with the US National Guard drives past a destroyed shrimping boat after the passing of hurricane Laura in Hackberry, Louisiana on August 28, 2020. Photo: AFP

LAKE CHARLES (UNITED STATES), August 29: At least 14 people were killed after Hurricane Laura slammed into the southern US states of Louisiana and Texas, authorities and local media said Friday.
Louisiana’s Governor John Bel Edwards confirmed at least 10 people had died in his state, half from using carbon monoxide-producing portable generators indoors in the aftermath of the storm making landfall Thursday.
Four of the remaining deaths were caused by trees falling on people’s homes, according to Edwards, while a man drowned after his boat sank in the storm.
There were 464,813 customers without power in Louisiana on Friday, according to the site Poweroutage.us.
Texas ended up being spared the brunt of the hurricane, which has since weakened significantly. Three of the state’s four deaths were also reportedly due to carbon monoxide poisoning from generators.
Those victims, all believed to be homeless, had sought shelter in a pool hall in the southeastern town of Port Arthur and carried its generator inside, according to the Beaumont Enterprise.
Local media reported Friday morning that a man died in East Texas, although it is unconfirmed that he was a direct victim of the hurricane.
The CBS affiliate for East Texas said the man was killed when a tree fell on his mobile home in Hemphill.
Earlier Friday, Haiti’s civil protection service said 31 people had died due to Hurricane Laura, which blasted the island nation as a tropical storm last weekend before turning into a powerful Category 4 hurricane. (AFP)